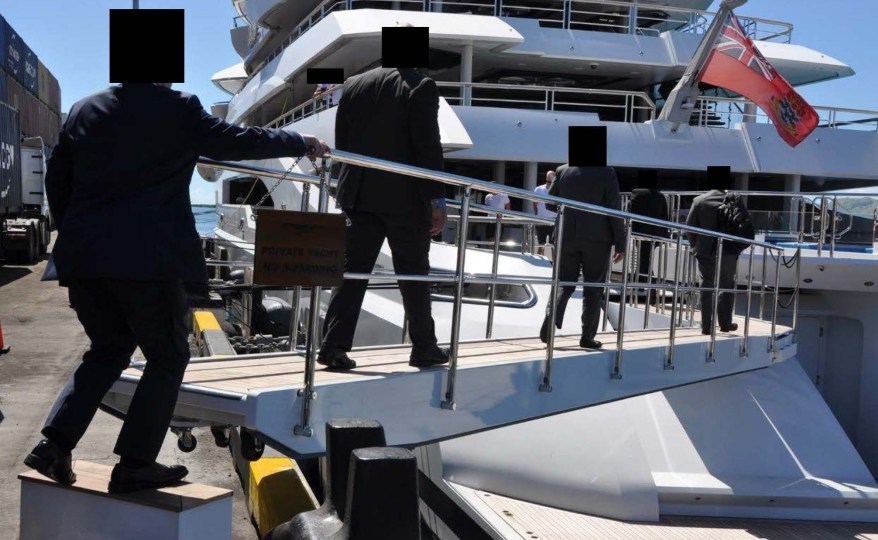 Authorities board the yacht in port in Fiji. Photo: US Department of Justice

A $US300 million ($421 million) superyacht owned by a Russian Oligarch has been seized by Fijian authorities at the request of the US.

The US Department of Justice announced on Thursday that the 106-metre luxury vessel, Amadea – believed to be owned by sanctioned Russian billionaire Sulieman Kerimov – had been confiscated in Lautoka, Fiji.

Fijian authorities, along with members of the US Marshals and FBI, boarded the yacht to seize it from private hands after US prosecutors issued a warrant and sought support from the Pacific Islands nation.

The yacht had been subject to legal proceedings since it mysteriously arrived in Fiji in mid-April, as the vessel’s owners tried to prevent US prosecutors from registering a warrant.

“The Amadea is subject to forfeiture based on probable cause of violations of US law,” the US Department of Justice said in a statement on Friday (Australian time).

This included violations of the International Emergency Economic Powers Act and suspected acts of money laundering and conspiracy.

The yacht was seized as part of the US operation KleptoCapture, a task force charged with locating and seizing the wealth of sanctioned oligarchs and Vladimir Putin allies.

On paper, the superyacht is owned by Cayman Islands company Millemarin Investments. But the Department of Justice says, “according to court documents, Kerimov owned the Amadea.”

Fiji’s High Court on Friday refused a stay application by the vessel’s registered owner, Millemarin Investments, to stop US authorities removing it from Fiji, Fiji’s public prosecutor said in a statement.

The superyacht had been handed over to US authorities, it said.

The FBI said in an affidavit attached to the US seizure warrant that Fiji authorities had found documents on the Amadea showing breaches of US law because Mr Kerimov was sanctioned by the US in 2018.

“There is probable cause to believe that Kerimov and those acting on his behalf and for his benefit caused US dollar transactions for the operation and maintenance of the Amadea to be sent through US financial institutions, after a time which Kerimov was designated by the Treasury Department,” the FBI said.

The vessel had running costs of $US25 million to $US30 million, it said.

Lawyers for Millemarin have denied it is owned by Mr Kerimov. The vessel’s lawyer, Feizal Haniff, declined to comment to Reuters on Friday.

The FBI said the Amadea had tried to avoid being seized “almost immediately” after Russian troops entered Ukraine.

“Amadea turned off its automated information systems (AIS) on February 24, 2022, almost immediately after the start of the Russian invasion of Ukraine,” the FBI said.

The vessel’s paperwork showed its next destination was the Philippines but the FBI believed it was headed to the Russian Pacific port of Vladivostok.

The US court designated Mr Kerimov as among those Russian oligarchs who profit from Moscow through corruption and its malign activity around the globe, including the occupation of Crimea.

Mr Kerimov has been sanctioned by Australia, the US, Britain and the European Union over Russia’s invasion of Ukraine.

“This yacht seizure should tell every corrupt Russian oligarch that they cannot hide – not even in the remotest part of the world,” US Deputy Attorney General Lisa Monaco said in a statement.

“We will use every means of enforcing the sanctions imposed in response to Russia’s unprovoked and unjustified war in Ukraine,” she said.