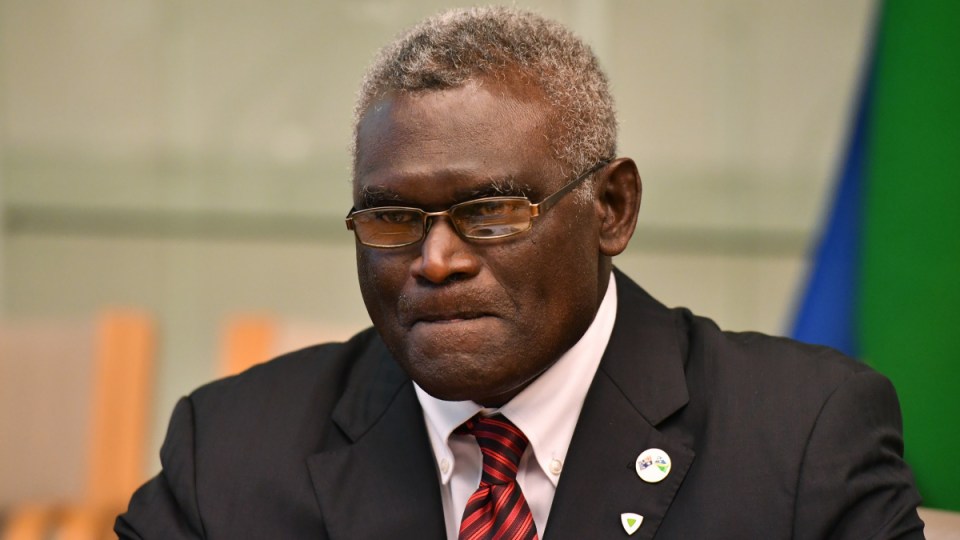 Solomons PM Sogavare says aligning with China puts his country 'on the right side of history'. Photo: AAP

A senior US official has met the Solomon Islands leader days after the Pacific island nation and China signed a security pact that Australia and Pacific neighbours fears will extend China’s military presence in the region.

Despite a flurry of calls not to go ahead with the deal, Solomon Islands Prime Minister Manasseh Sogavare and China announced this week they had signed it.

Brushing off international concerns, Sogavare told parliament on Wednesday the pact would not undermine peace in the region.

Neither the US Embassy nor the government commented on the talks, though a Solomons official said the opening of a US embassy in Honiara was on the agenda.

The security pact is a major inroad for China in the Pacific, and Campbell had been expected to press Sogavare not to sign it.

Australian officials had previously said Campbell’s visit was likely to have prompted China and the Solomon Islands to announce the signing was a done deal.

The Solomon Islands occupy a strategic position in the Pacific and were home to some of the bloodiest fighting of that theatre of World War II.

The country was rocked by riots last year in which four people were killed.

Also on Friday, Sogavare joined China’s ambassador, Li Ming, at the handover of an athletics field donated by China, one of the sporting facilities worth a total of $US120 million ($A163 million) China has paid for to help the Solomons host the 2023 Pacific Games.

The Solomons switched diplomatic ties from Taiwan to Beijing in 2019 and Sogavare said in a speech at the ceremony the decision had “placed the country on the right side of history”.

Li, in a livestreamed speech, defended the security pact.

“Development and security are two sides of a coin,” he said.

“Without safety and security countries cannot enjoy sustainable development and economic growth. This was demonstrated by the riot last year.”

But for Australia, the security pact raises the prospect of a Chinese military presence less than 2000 kilometres from its shores.

Sogavare has ruled out hosting a Chinese military base, saying the pact, details of which have not been disclosed, will allow Chinese police to protect Chinese-funded infrastructure projects.

New Zealand and Tonga have said they will raise the security deal at an upcoming meeting of Pacific Islands Forum leaders while Japan plans to send a vice foreign minister to the Solomon Islands this month over concerns about the pact, the Kyodo news agency reported.

Campbell said in January the Pacific was likely to see “strategic surprise” in terms of basing arrangements, and the US and allies including Australia, New Zealand, Japan and France needed to step up in the region.

The Solomons opposition leader also met Campbell and discussed building democracy in the region, the opposition party said in a statement.