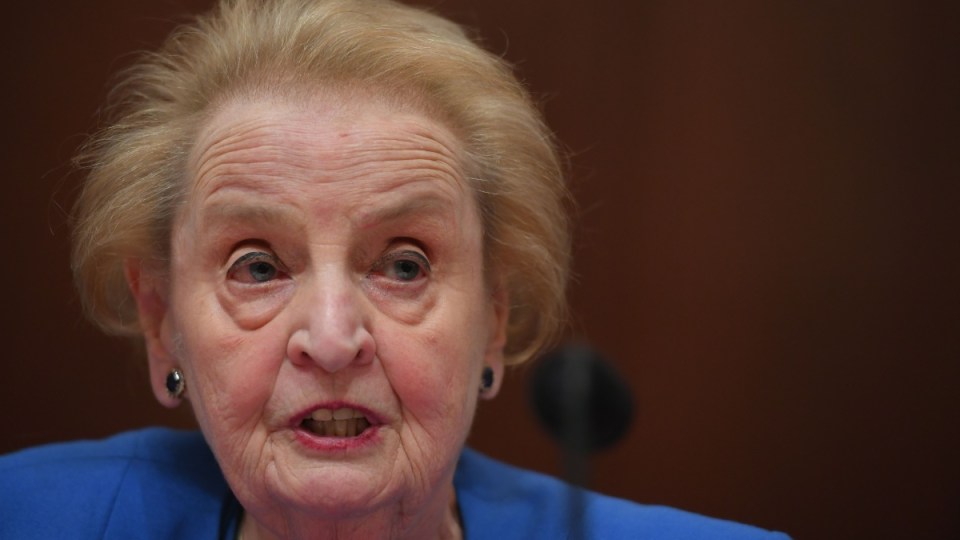 Madeleine Albright had been diagnosed with cancer. Photo: Getty

Madeleine Albright, who fled the Nazis as a child in her native Czechoslovakia during World War II but rose to become the first female US secretary of state has died at the age of 84, her family says.

Dr Albright, a tough-talking diplomat in an administration that hesitated to involve itself in the two biggest foreign policy crises of the 1990s – the genocides in Rwanda and Bosnia-Herzegovina.

“We are heartbroken to announce that Dr Madeleine K Albright, the 64th US Secretary of State and the first woman to hold that position, passed away earlier today. The cause was cancer,” the family said on Twitter.

Dr Albright, who had become the US ambassador to the United Nations in 1993, had pressed for a tougher line against Serb forces in Bosnia.

But during then-president Bill Clinton’s first term, many of the administration’s top foreign policy experts vividly remembered how the US became bogged down in Vietnam and were determined to not repeat that error in the Balkans.

The US responded by working with the NATO military alliance on air strikes that forced an end to the war but only after it had been going on for three years.

Dr Albright’s experience as a refugee prompted her to push for the US to be a superpower which used that clout.

She wanted a “muscular internationalism,” said James O’Brien, a senior adviser to Dr Albright during the Bosnian war.

She once upset a Pentagon chief by asking why the military maintained more than one million men and women under arms if they never used them.

Early in the Clinton administration, while she unsuccessfully advocated for a quicker, stronger response in Bosnia, Dr Albright backed a UN war crimes tribunal that eventually put the architects of that war, including Serbian President Slobodan Milosevic and Bosnian Serb leaders, in jail, O’Brien said.

The plain-spoken Dr Albright took a tough line on a 1996 incident where Cuban jet fighters downed two unarmed US-based planes, saying: “This is not cojones, this is cowardice,” using a Spanish vulgarity meaning “testicles”.

Dr Albright, who was born in the former Czechoslovakia in 1937, was nominated to become the first woman secretary of state, and confirmed unanimously in 1997.

The painful lessons learned in Rwanda and Bosnia served the US well in Kosovo, where NATO responded to a Serbian program of ethnic cleansing of ethnic Albanians with an 11-week campaign of air strikes in 1999 that extended to Belgrade.

During efforts to press North Korea to end its nuclear weapons program, which were eventually unsuccessful, Dr Albright travelled to Pyongyang in 2000 to meet North Korean leader Kim Jong-il, becoming the highest ranking US official to visit the secretive Communist-run country.

Once the Clinton years and the 1990s were over, Dr Albright became an icon to a generation of young women looking for inspiration in their quest for opportunity and respect in the workplace.

Dr Albright was fond of saying: “There’s a special place in hell for women who don’t help each other.”