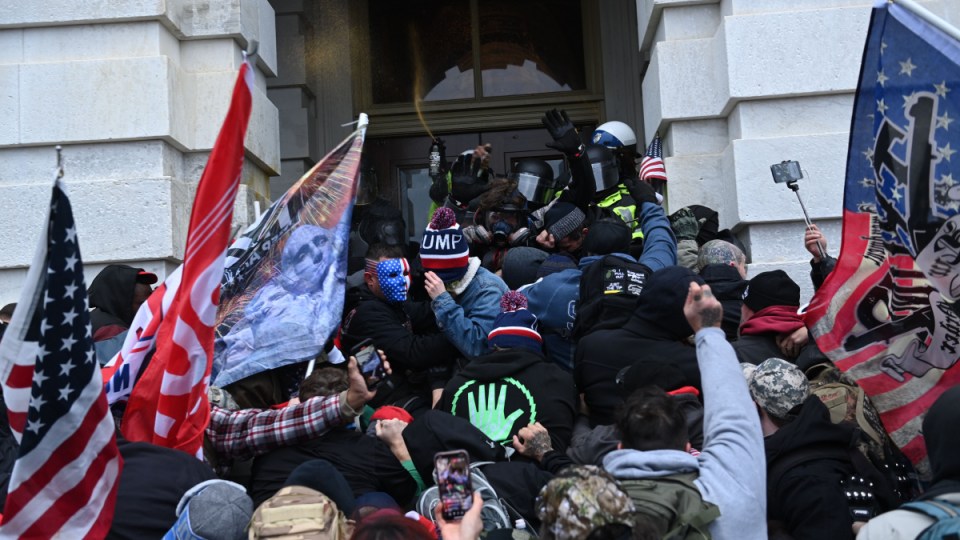 Trump supporters clashed with police and security forces as they stormed the US Capitol in January 2021. Photo: Getty

A former San Francisco Bay Area resident facing federal criminal charges from the January 6 riot at the US Capitol has been granted asylum in Belarus, the former Soviet nation’s state media reports.

Evan Neumann, 49, was charged a year ago with assaulting police, including using a metal barricade as a battering ram during the insurrection.

In an interview with Belarus 1 channel that aired last year, he acknowledged being at the building that day but rejected the charges and said he did not hit any officers.

The move comes a month into Russia’s invasion of Ukraine and as US President Joe Biden was heading to Europe to talk with allies about possible new sanctions against Russia and more military aid for Ukraine.

“Today I have mixed feelings,” Mr Neumann told the state-owned television network in the report aired on Tuesday, the Washington Post reported.

“I am glad Belarus took care of me. I am upset to find myself in a situation where I have problems in my own country.”

Belarusian President Alexander Lukashenko and Russian leader Vladimir Putin have used the January 6 riot as evidence of a double standard by the US on anti-government crackdowns.

Belarus is a Russian ally and neighbour to Ukraine. It does not have an extradition agreement with the US.

Mr Neumann told Belarus 1 he travelled to Italy in March 2021 and eventually arrived in Ukraine before crossing over illegally into Belarus. He owns a handbag manufacturing business.

Police body-camera footage appears to show Mr Neumann and others shoving a metal barricade into a line of officers before punching two officers hitting them with the barricade, according to court papers.