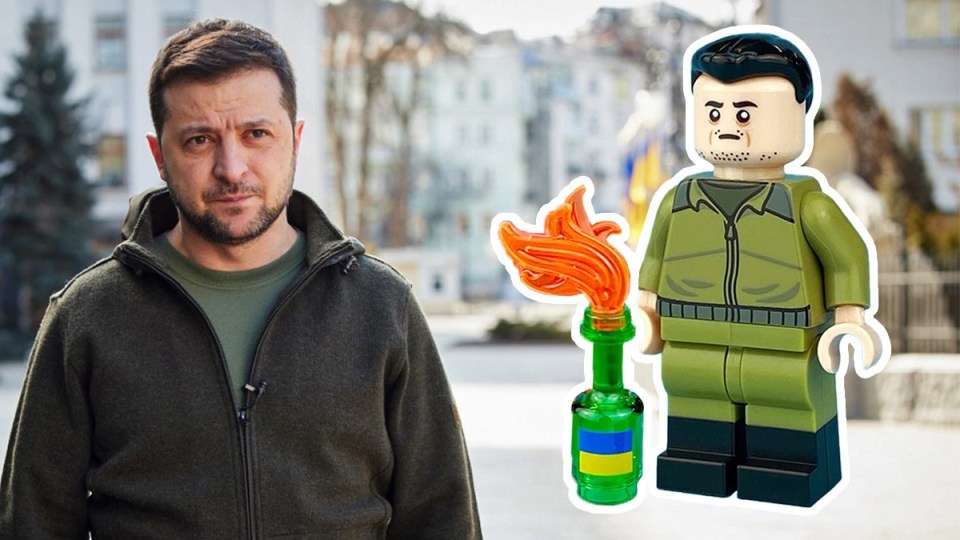 Citizen Brick said Zelensky as a "heroic figure" inspired them to create the minifig'. Photo: TND

As Volodymyr Zelensky emerges as a larger-than-life figure during the Russian invasion, it is the Ukrainian president in miniature which is helping raise money for victims of the war.

The custom Lego creators launched the figures (US$100) with the aim of raising funds for the charity group Direct Relief.

Joe Trupia, owner of Citizen Brick, told the Washington Examiner it wanted to donate the money to the nonprofit organisation because it was “top ranked in the NYTimes list of charities helping Ukraine”.

“I think he’s emerged as a heroic figure in this situation,” Trupia said.

“I think we responded to his bravery in the face of an invasion. We don’t usually make political figures, but he has kind of a distinctive appearance that translated well to minifigure.”

Unsurprisingly, the minifigs – with the optional extra of a tiny Molotov cocktail featuring the blue and yellow colours of the Ukrainian flag – sold out in record time, smashing their target in less than 24 hours and raising $16,540.

“Due to overwhelming interest in supporting this charity campaign, we have arranged to produce another run of the Zelensky figures,” the Citizen Brick Instagram account said on Wednesday.

“Our hopes are to raise $100,000, all of which will be donated to @directrelief to support their efforts in providing medical supplies to Ukrainian refugees.”

After once again selling out of the figurines, the team announced it had raised a total of $145,388.

The fortunate few who were able to get their hands on this one-of-a-kind product now hold a piece of history as well as donating to a good cause, as Citizen Brick won’t be making further Zelensky figurines.

“Due to the limited supply of necessary parts, we won’t be able to make more. We hope that you will consider making a direct donation to Direct Relief or another relevant charity instead,” Citizen Brick announced.

“We thank you for your generosity and support of this project.”

Direct Relief says it has sent more than $26 million in medical aid to Ukraine in the past six months, according to Plastics Today.

On its official Instagram page, Ukraine asked Lego to “reserve some bricks for us, we will need them to rebuild our cities and villages”.