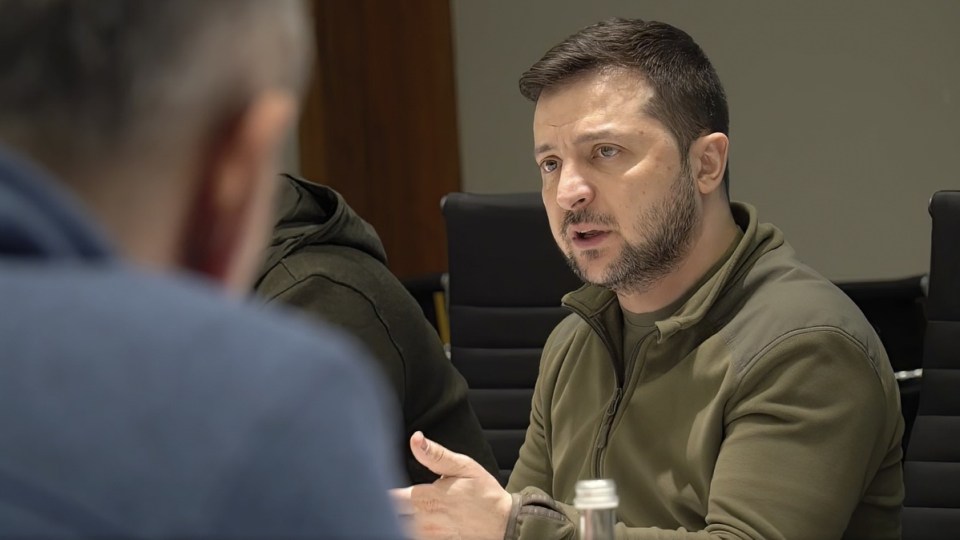 Time is needed for decisions to be in the interests of Ukraine, President Volodymyr Zelenskyy says. Photo: AP

About 20,000 people have managed to escape the besieged port of Mariupol in private cars, the Ukrainian interior ministry says, but hundreds of thousands remain trapped by Russian shelling, many without heating, power or running water.

Peace talks continue and in a hint of a possible compromise, Ukrainian President Volodymyr Zelenskiy said his country was prepared to accept security guarantees from the West that stop short of its long-term goal of joining NATO.

Moscow sees any future Ukraine membership of the Western alliance as a threat and has demanded guarantees it will never join.

Russian forces have focused on Mariupol, constantly bombarding it for the past two weeks, as it is a key city on the Azov Sea coast which they must gain control of to push further west.

Ukrainian officials estimate that more than 2500 residents have been killed in the fighting and at least 200,000 are in urgent need of evacuation.

Moscow has not captured any of Ukraine’s 10 biggest cities following its invasion that began on February 24, the largest assault on a European state since 1945.

Russian forces are struggling to overcome the challenges posed by Ukraine’s terrain, according to Britain’s Ministry of Defence in an intelligence report on Wednesday.

Russian troops have remained largely tied to Ukraine’s road network and have demonstrated a reluctance to conduct off-road manoeuvres. The destruction of bridges by Ukrainian forces has also played a key role in stalling Russia’s advance, it said.

And Russia’s continued failure to gain control of the air has drastically limited its options.

“The tactics of the Ukrainian Armed Forces have adeptly exploited Russia’s lack of manoeuvre, frustrating the Russian advance and inflicting heavy losses on the invading forces,” said the report.

War could end sooner than expected

Ukrainian officials have raised hopes the war could end sooner than expected, possibly by May, saying Moscow may be coming to terms with its failure to impose a new government by force and running out of fresh troops.

“The meetings continue, and, I am informed, the positions during the negotiations already sound more realistic. But time is still needed for the decisions to be in the interests of Ukraine,” Zelenskiy said in a video address ahead of the next round of talks.

US President Joe Biden will make his first visit to Europe since Russia invaded Ukraine to discuss the crisis with NATO allies next week, the White House said.

Biden will attend a NATO leaders meeting at the military alliance’s headquarters in Brussels on March 24.

Biden is expected to announce an additional $US800 million in security assistance to Ukraine, a White House official said.

NATO is set to tell its military commanders on Wednesday to draw up plans for new ways to deter Russia from future military action, including more troops and missile defences in eastern Europe, officials and diplomats said.

“We need to reset our military posture for this new reality,” NATO Secretary General Jens Stoltenberg told reporters on Tuesday.

The conflict has brought economic isolation upon Russia and the economic cost was fully exposed on Wednesday as its sanctions-ravaged government teetered on the brink of its first international debt default since the Bolshevik revolution.

Moscow was due to pay $US117 million in interest on two dollar-denominated sovereign bonds it had sold back in 2013, but it faces limits on making payments and has talked of paying in roubles, which would trigger a default.