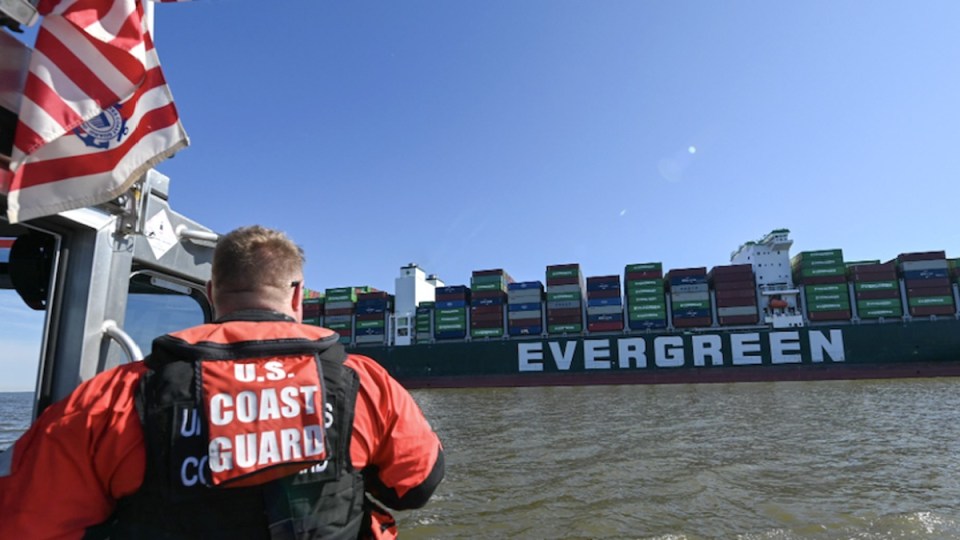 The Ever Forward has run aground in the US, almost a year after its sister ship blocked the Suez Canal. Photo: US Coast Guard

Nearly one year after the massive cargo ship Ever Given captured worldwide attention when it blocked the Suez Canal, a sister vessel has repeated the feat in the US.

The Ever Forward freight ship, owned by the same company as the container ship that blocked world trade when it became wedged in Egypt, ran aground in the state of Maryland on Monday.

Evergreen’s Ever Given was famously lodged in the Suez Canal for six days in March 2021, causing widespread upheaval.

However, the stranded Ever Forward – which is grounded in the Chesapeake Bay in the mid-Atlantic – is not affecting transit through the port, Maryland Port Administration reports.

Local authorities say the 334-metre ship had left a Baltimore port on Sunday (US time) en route to Norfolk, Virginia, when it ran aground in less than 10 metres of water.

The US Coast Guard said the freight ship left the Craighill Channel and sailed into shallow water.

The Coast Guard is investigating how the Ever Forward got stuck. It is also working out how to tow safely tow the freighter from the 7.5-metre deep water.

Authorities said interviews and evidence were still being collected.

The ship’s owner, Evergreen, reportedly arranged for divers to inspect it for damage on Tuesday. However, there have so far been no reports of damage.

Other vessels have been asked to slow down when passing the stationary Ever Forward while journeying towards the port.

Last year, the 400-metre-long Ever Given captivated the world with its days-long grounding in the Suez’s sandy bank.

The container ship was detained by the Suez Canal Authority until July after the owner and insurers reached a compensation settlement.

Egypt demanded more than $US900 million ($1.2 billion) in compensation for the salvage operation and other losses. That was later lowered to $US550 million ($765 million).