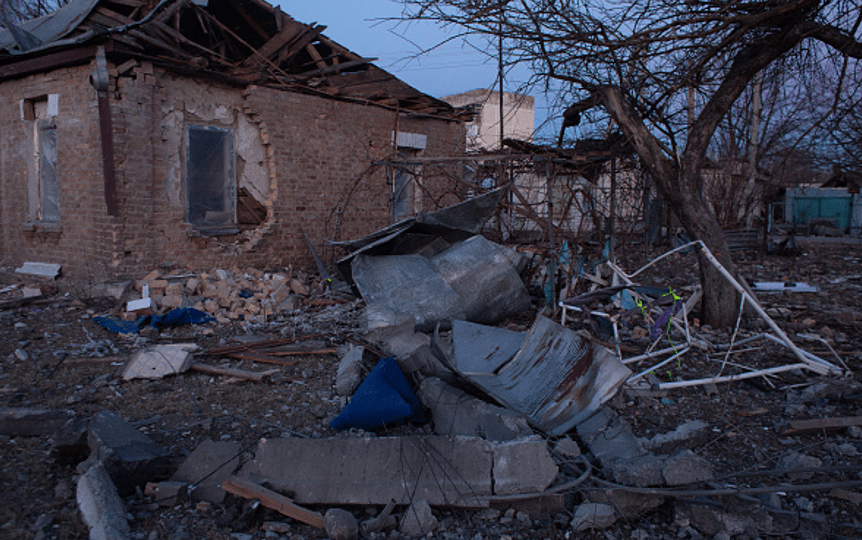 Mere weeks this pile of rubble was a family home in the town of Baryshivka. Then Russian unleashed a rain of missiles.Photo: Getty

Ukraine’s survival as a free and independent nation hangs in the balance, President Volodymyr Zelenskiy has said as Russian forces continue their creeping advance on a variety of fronts across the war-ravaged country.

Zelenskiy says his country has reached a “strategic turning point” , as Russian forces bombard Ukraine cities and appear to be regrouping for an assault on the capital Kyiv.

The governor of the Kharkiv region, on the Russian border, said a psychiatric hospital had been hit, and the mayor of the city of Kharkiv said about 50 schools had been destroyed.

Ukraine has accused Russian forces of violating international law by abducting the mayor of Melitopol, a southeastern city.

Russia has not commented on the fate of Mayor Ivan Fedorov. Ukraine says Russian forces kidnapped him after falsely accusing him of terrorism.

In the besieged southern city of Mariupol, the city council said at least 1,582 civilians had been killed as a result of Russian shelling and a 12-day blockade that has left hundreds of thousands trapped with no food, water, heat or power.

Russia’s defence ministry said the Black Sea port was now completely surrounded and Ukrainian officials accused Russia of deliberately preventing civilians getting out and humanitarian convoys getting in.

A new effort to evacuate civilians along a humanitarian corridor appeared to have failed.

US President Joe Biden said the G7 industrialised nations would revoke Russia’s “most favoured nation” trade status. He also announced a US ban on imports of Russian seafood, alcohol and diamonds.

European Union leaders meeting in France said they were ready to impose harsher economic sanctions on Russia and might give Ukraine more funds for arms. But they rejected Ukraine’s request to join the bloc.

At a meeting with Belarus President Alexander Lukashenko, Putin said there were “certain positive shifts” in talks with Kyiv, but did not elaborate.

With the Russian assault now in its third week, Zelenskiy, who has rallied his people with a series of addresses, said Ukraine had “already reached a strategic turning point”.

“It is impossible to say how many days we still have (ahead of us) to free Ukrainian land. But we can say we will do it,” he said. “We are already moving towards our goal, our victory.”

Russia’s main attack force has been stalled on roads north of Kyiv, having failed in what Western analysts say was an initial plan for a lightning assault.

But images released by private US satellite firm Maxar showed armoured units manoeuvring in and through towns close to an airport on Kyiv’s northwest outskirts, site of fighting since Russia landed paratroopers there in the first hours of the war.

Other elements had repositioned near the settlement of Lubyanka just to the north, with artillery howitzers in firing positions, Maxar said.

Britain’s defence ministry said Russia appeared to be gearing up for new offensive activity in the coming days that would probably include operations against Kyiv.

However, the Russian ground forces were still making only limited progress, hampered by logistical problems and Ukrainian resistance, it said in its intelligence update.

“Our opponent has been halted in practically every direction by air strikes, rocket fire and ground attacks,” Ukraine presidential adviser Oleksiy Arestovych told a news briefing.

Ukraine also raised the prospect of Moscow’s ally Belarus throwing its troops into the war, accusing Russia of staging “false flag” air attacks on Belarus from Ukraine to provide an excuse for an offensive.

Since the invasion, Western countries have swiftly moved to isolate Russia from the global financial system.

Announcing further EU sanctions, European Commission President Ursula von der Leyen said the bloc would on Saturday suspend Moscow’s privileged trade and economic treatment; crack down on its use of crypto-assets; and ban the import of iron and steel goods from Russia as well as the export of luxury goods in the other direction.

Ukraine’s fate in the balance as Russians’ advance tightens noose