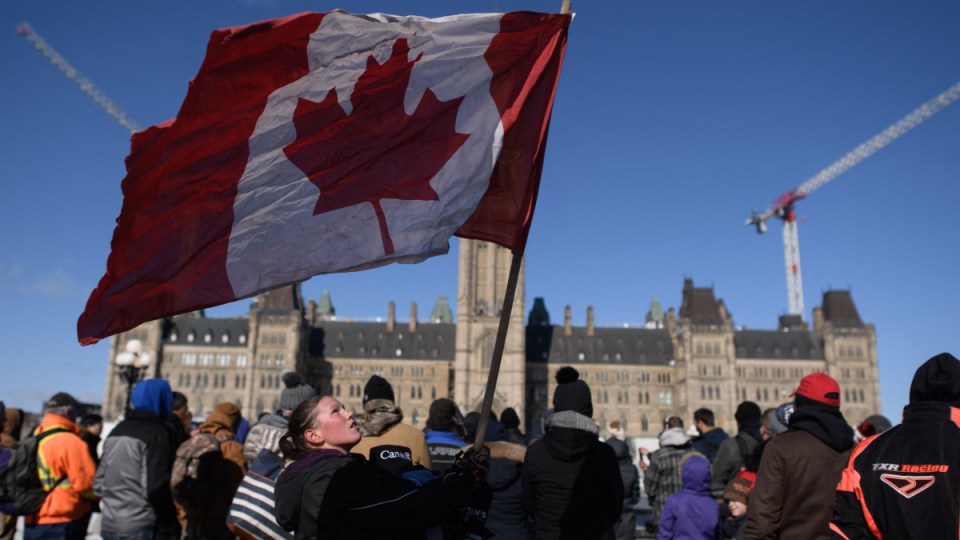 Protesters in downtown Ottawa have vowed to defy emergency orders until their demands are met. Photo: Getty

Ottawa’s police chief has resigned after criticism that he did too little to stop COVID-19 protests that have paralysed Canada’s capital city and forced Prime Minister Justin Trudeau to invoke emergency powers.

A trucker-led movement calling on the government to lift vaccine mandates has occupied parts of downtown Ottawa since late January and blocked US border crossings.

It has also inspired similar protests around the world, even as Canada moves to lift some health restrictions.

Protesters retreated from the Ambassador Bridge to Detroit and two other crossings after threats of fines and jail time. But hundreds of trucks are still blocking downtown areas, raising questions over Ottawa Police Chief Peter Sloly’s handling of the crisis.

Diane Deans, chair of the Ottawa police board, said the city had reached “mutually agreeable separation” with Mr Sloly, without saying why he had stepped down.

Critics alleged he was too permissive toward protesters who at the peak of their movement had parked 4000 trucks and vehicles near Canada’s parliament, prime minister’s office and other government buildings.

Mr Sloly said he had done “everything possible to keep this city safe and put an end to this unprecedented and unforeseeable crisis”. His defenders had voiced fears the use of force by police could stoke violence.

Mr Trudeau sought on Monday to beef up policing by invoking the Emergencies Act, which empowers his government to cut off protesters’ funding and reinforce provincial and local law enforcement with federal officers.

Protesters blocked the Ambassador Bridge, a vital trade corridor between Windsor, Ontario, and Detroit, for six days before police on Sunday cleared those who ignored orders to retreat.

Two other US crossings reopened on Tuesday after police cleared protesters from one and demonstrators voluntarily left the other, officials said. People blocking a fourth crossing in Manitoba province were expected to leave by Wednesday, police said.

Protesters decided to leave the crossing in Coutts, Alberta, after the Royal Mounted Canadian Police seized weapons from a group that had aimed to cause harm if officers started clearing people, the town’s mayor, Jim Willett, said.

“The federal government will have to look at protecting borders very differently than they have in the past to stop this from happening again,” Mr Willett said.

With new COVID-19 cases falling, Canada’s health ministry said on Tuesday it would ease entry for fully vaccinated international travellers. But officials deny they are loosening curbs to appease protesters, saying instead the limits are no longer needed to contain infection.

In downtown Ottawa, protesters camping out in frigid temperatures vowed to defy Mr Trudeau’s emergency orders until their demands for a lifting of all pandemic-era mandates were met.