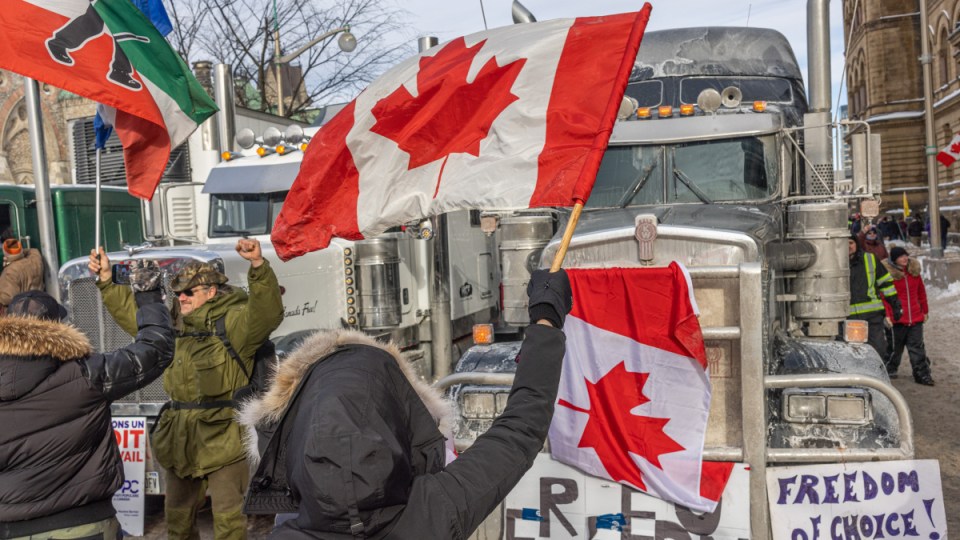 Frustration has grown in Canada over policing tactics used to quell the trucker demonstrations. Photo: Getty

In the western Canadian province of Alberta on Monday (local time), police broke up an armed group that was prepared to use violence to back a blockade at a border crossing with the US, authorities said.

Mr Trudeau plans to use the 1988 Emergencies Act, which allows the federal government to override the provinces and authorise special temporary measures to ensure security during national emergencies, the sources said.

The act has only been used once in peacetime – by Mr Trudeau’s father, former prime minister Pierre Trudeau – who invoked an earlier version of the act in 1970 after a small militant group of Quebec separatists kidnapped a British diplomat and then abducted a provincial cabinet minister who was killed in captivity.

The prime minister’s office said Mr Trudeau would speak to the media on Monday night.

The “Freedom Convoy” protests, started by Canadian truckers opposing a COVID-19 vaccinate-or-quarantine mandate for cross-border drivers, have turned into a rallying point for people opposing the policies of Mr Trudeau’s government, covering everything from pandemic restrictions to a carbon tax.

One of the sources, who could not speak on the record due to the sensitivity of the situation, said the aim of using the emergency powers was to provide federal police support to local and provincial forces, not to use the military.

Mr Trudeau had already spoken to the provincial premiers about the plan, the source said.

If invoked by the government, the Canadian Parliament would have to approve the use of the emergency measures within seven days, and it also has the power to revoke them.

Mr Trudeau’s Liberal minority government needs help from the opposition to pass the measures in Parliament. On Monday, New Democrat leader Jagmeet Singh said his left-leaning party would be willing to back it if it meant ending the protests.

Frustration has grown about policing tactics used to quell the demonstrations in the border city of Windsor, Ontario, and in Ottawa, the nation’s capital, where protests entered a third week.

Canadian PM to use emergency powers to tackle protests