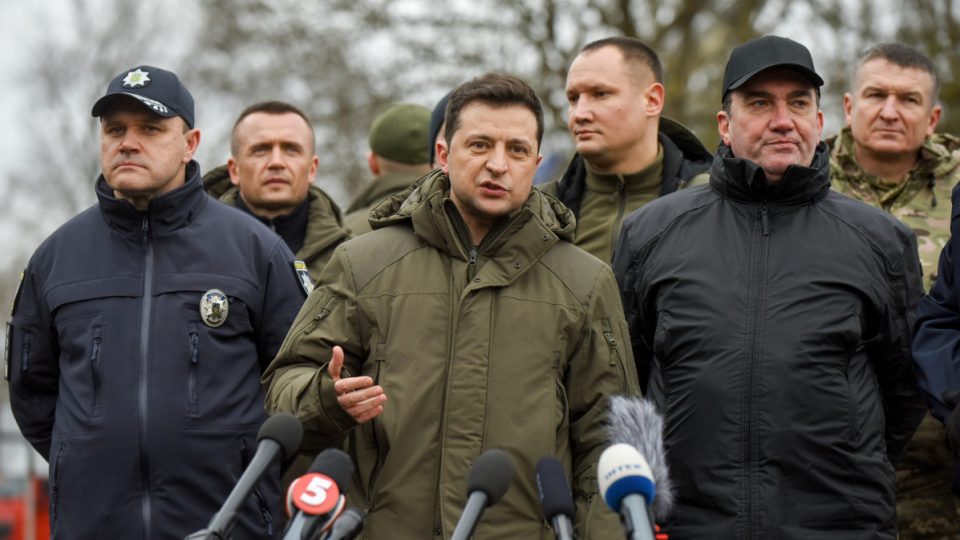 Volodymyr Zelensky has warned Vladimir Putin that Russia will be the ultimate victim of the Ukraine invasion.Photo: AAP Photo: AAP

Ukraine’s president has played down intensified warnings of a possible Russian invasion within days, saying he has yet to see convincing evidence.

Volodymyr Zelensky’s comments came even as the US warned of more Russian troops pressing closer to Ukraine’s borders and some airlines cancelled or diverted flights to the country.

The White House said US President Joe Biden would talk later on Sunday (US time) with Mr Zelensky.

The Ukrainian leader’s repeated statements urging calm among his people – while Russian forces surround his country on three sides in what Russia insists are military exercises – grew this weekend, with Mr Zelensky questioning strident warnings from US officials in recent days that Russia could be planning to invade as soon as the middle of next week.

The US picked up intelligence that Russia was looking at Wednesday as a target date, according to a US official familiar with the findings.

“We’re not going to give Russia the opportunity to conduct a surprise here, to spring something on Ukraine or the world,” US national security adviser Jake Sullivan told CNN about the warnings.

“We are going to make sure that we are laying out for the world what we see as transparently and plainly as we possibly can,” he said.

The US has largely not made public the evidence it says is underlying its most specific warnings on possible Russian planning or timing.

The Russians have deployed missile, air, naval and special operations forces, as well as supplies to sustain an invasion.

This week, Russia moved six amphibious assault ships into the Black Sea, augmenting its capability to land on the coast.

Pentagon spokesman John Kirby said on Sunday that Russia had well over 100,000 troops along Ukraine’s borders, “and actually, over the last few days, even more”.

Mr Kirby cited “a mosaic of intelligence” the US had gathered, but gave no details.

“We have good sources of intelligence and they’re telling us that, you know, that things are sort of building now to some crescendo opportunity for Mr Putin,” he said.

Mr Zelensky’s comments this weekend indicated frustration at the warnings from Washington, as he tried to minimise damage to Ukraine’s economy during the crisis.

“We understand all the risks, we understand that there are risks,” he said in a live broadcast.

“If you, or anyone else, has additional information regarding a 100 per cent Russian invasion starting on the 16th, please forward that information to us.”

In an hour-long call on Saturday with Russian President Vladimir Putin, Mr Biden said an invasion of Ukraine would cause “widespread human suffering” and that the West was committed to diplomacy to end the crisis but “equally prepared for other scenarios”, the White House said.

While Ukraine has not officially closed its airspace, the country’s air traffic safety agency Ukraerorukh issued a statement declaring the airspace over the Black Sea to be a “zone of potential danger” and recommended that planes avoid flying over the sea from February 14-19.

Ukraine unconvinced by invasion threat despite US intelligence