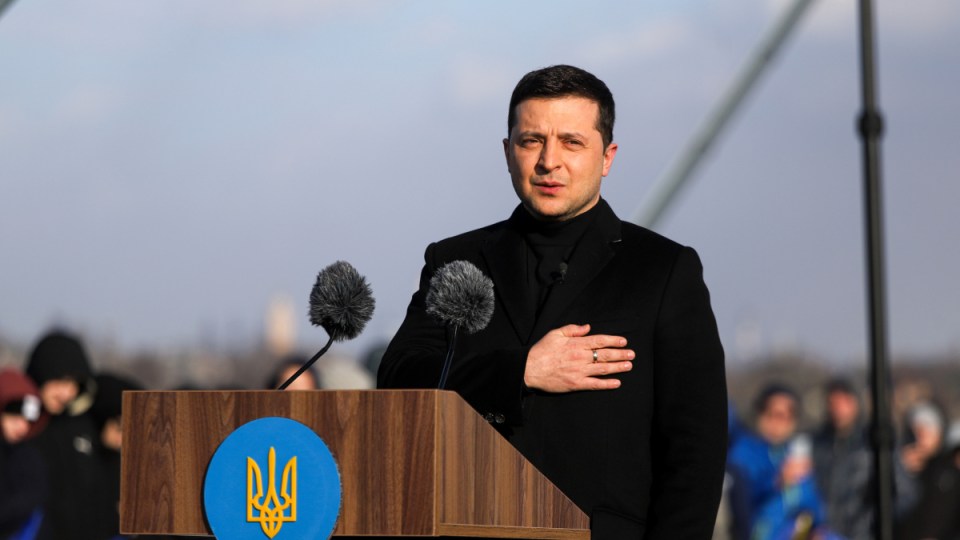 Ukraine President Volodymyr Zelenskiy has told the public there is no sign of an imminent invasion. Photo: Getty

Ukrainian President Volodymyr Zelenskiy has urged people to stay calm about the threat of a Russian attack and says there is work in progress to bring about a meeting between him and the leaders of Russia, France and Germany.

In a televised video address, Mr Zelenskiy said this week’s withdrawal of personnel from some foreign embassies in Kyiv did not signal that a military escalation with Russia was inevitable.

“There are no rose-coloured glasses, no childish illusions, everything is not simple …. But there is hope,” Mr Zelenskiy said.

“Protect your body from viruses, your brain from lies, your heart from panic.”

Ukraine Defence Minister Oleksii Reznikov said earlier on Tuesday that “as of today, there are no grounds to believe” that Russia is preparing to invade imminently, noting that its troops have not formed what he called a battle group that could force its way through the border.

“No need to have your bags packed.”

France’s head of state Emmanuel Macron said on Tuesday he wanted to propose a path of de-escalation to Russian President Vladimir Putin in talks on Friday.

Mr Macron said that the aim of the meeting was to take stock and obtain some clarifications on Russia’s role in the Ukraine conflict.

Élysée sources said that Macron believed there was room for diplomacy in defusing the conflict.

At the same time, however, he wanted to make it clear that military actions by Russia against Ukraine would have very serious consequences.

NATO has expressed concerned that the conflict could escalate militarily with an invasion of Ukraine by Russian troops.

Russia denies that such plans exist.

In Élysée circles, a de-escalation on the Russian side could be achieved through humanitarian measures, getting the separatists loyal to the Kremlin to negotiate with Ukraine and a reduction of the military build-up along the border.

According to UN estimates, more than 14,000 people have been killed in fighting between Ukrainian government troops and separatists loyal to Russia in the Ukrainian region of Donbass.