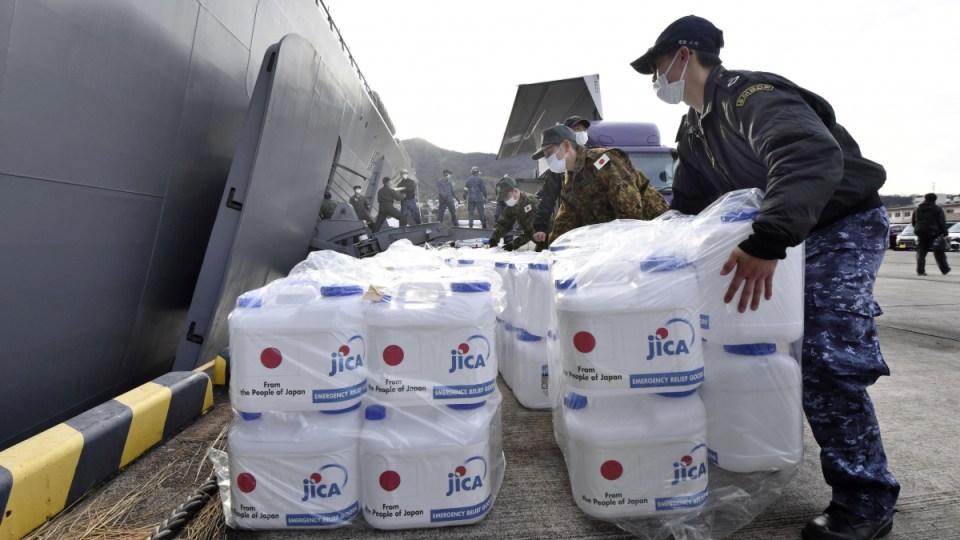 Humanitarian relief supplies are being distributed in Tonga amid concerns over COVID-19. Photo: AAP

Humanitarian aid to Tonga is ramping up after the airport was cleared of ash, making it safe for planes to land, the Red Cross says, days after a volcanic eruption and tsunami devastated the South Pacific archipelago.

The International Federation of Red Cross and Red Crescent Societies (IFRC) said with the extra supplies its staff and volunteers are stepping up deliveries of drinking water and setting up shelters across the country’s many islands.

“This disaster has shaken the people of Tonga like nothing we have seen in our lifetime,” Sione Taumoefolau, secretary general of Tonga Red Cross, said in a statement on Wednesday.

“The tsunami has wiped out homes and villages, but we are already rebuilding amid the ashes.”

The US Agency for International Development (USAID), said the United States is providing an additional $US2.5 million ($A3.5 million) in humanitarian assistance and the guided missile destroyer USS Sampson, part of a multinational effort, arrived this week to support the efforts in Tonga.

An Australian warship expected to arrive in coronavirus-free Tonga on Wednesday was to deliver aid without human contact after about two dozen COVID-19 cases had been recorded among the crew.

The United Nations, Red Cross and other relief agencies on the ground in Tonga have warned that an outbreak in the island would be catastrophic.

“There is an urgent need for people to have access to safe water sources in the days and weeks to come,” Mr Taumoefolau said.

“Ash has settled in water tanks, requiring time to settle and careful treatment before use. It has also smothered much of the country, including houses and crops.”

The Hunga Tonga-Hunga Ha’apai volcano eruption triggered a tsunami that destroyed villages and resorts and knocked out communications for the nation of about 105,000 people.

Three people have been reported killed.

More aid as relief ramps up in Tonga