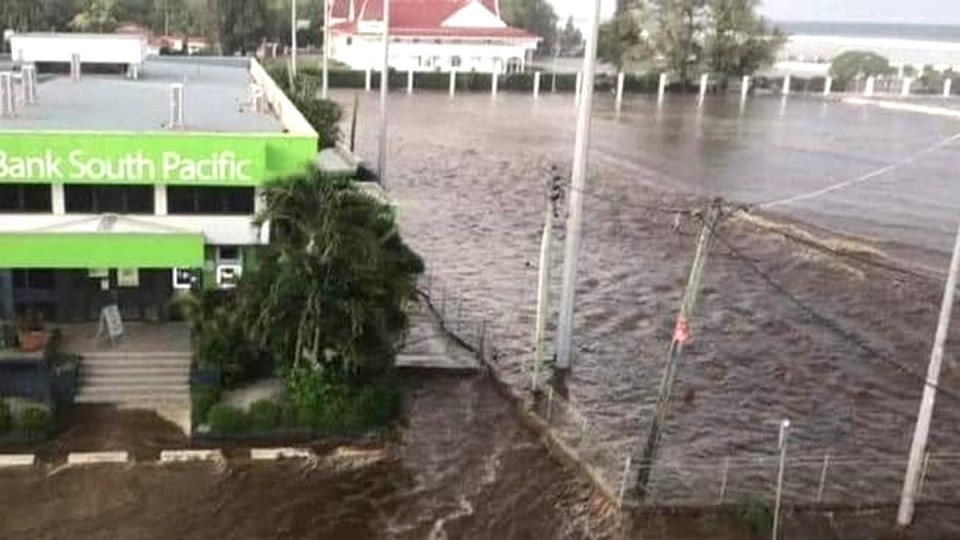 A tsunami triggered by the eruption engulfed the Tongan capital on Saturday. Photo: Facebook

Aid is on its way to Tonga, with aircraft on their way from Brisbane and Auckland on reconnaissance flights to assess damage in the Pacific nation after the weekend’s mammoth volcanic blast.

The Hunga Tonga-Hunga Ha’apai eruption – potentially the world’s most powerful in three decades – caused a tsunami across the Pacific, and blanketed the Tongan capital Nuku’alofa in thick ash.

As of Monday morning, much of Tonga’s power had been restored, as well as internal communication lines.

However, communication in and out of the remote Pacific nation – which is home to about 100,000 people – remains limited. That has made an assessment of local damage and the provision of aid difficult.

The United Nations has confirmed damage to buildings and infrastructure, as well as concerns over access to fresh water.

New Zealand Prime Minister Jacinda Ardern said boulders and boats had washed ashore on Tongatapu, the largest island and home to the capital, Nuku’alofa, about 65 kilometres south of the volcano.

“Seeing some of those waves come in and peeling back fencelines and structures, you can see the force of those surges,” she said.

“Everyone just wants to establish how wide-scale that impact has been.”

Tonga is comprised of 169 islands, only a few dozen of which are inhabited.

Foreign Affairs Minister Marise Payne said Australian authorities were trying to find out about the extent of damage outside Nuku’alofa.

“The Royal Australian Air Force are undertaking surveillance activity over the affected area, working very closely with NZ,” she said.

“This is a very challenging time. Communications are deeply, deeply affected by the events of the volcanic eruption.”

“We want to be in Tonga and on the ground as soon as we are possible able to be,” Ms Ardern said.

Tongan Olympian, Pita Taufatofua, who lives in Brisbane, said he had been unable to contact his family back home since the eruption. He said it was the same situation for most Tongans living abroad.

“My father back in Tonga and all my relatives are in the islands where, near where the epicentre of the volcanic eruption was. I spoke to my
father probably two or three days ago, before any of this happened,” he told the ABC on Monday.

“I think every Tongan around the world was trying to contact their family back in Tonga but the cable that provides the communication to Tonga seems to have been severed at some point. Nobody can get in contact or get any news out of Tonga.”

Volcanic ash in the air and on the runway in Tonga prevented an aerial mission in the immediate aftermath of the blast.

Just prior to 9am NZDT on Monday morning, a NZDF Orion aircraft took off from Auckland’s Whenuapai base on a mission to investigate further.

It was carrying food and medical supplies for the stricken nation.

An Australian P-8 Poseidon left Brisbane on a similar mission about the same time.

Both flights are expected to take 12-14 hours to return home.

“It’s looking to provide an assessment of the outer islands in particular,” Ms Ardern said.

“Things are calm [but] there is significant ash fall,” she told Radio NZ.

“Eighty per cent of power has been restored. However, internet connection and communications remain an issue.”

New Zealand will follow the reconnaissance mission with flights from the heavy-duty Hercules C-130 to drop any needed provisions.

University of Auckland volcanologist Shane Cronin said the eruption was likely to be the world’s biggest since the 1991 eruption of the Philippines’ Mount Pinatubo.

“Our research into these earlier eruptions suggests this is one of the massive explosions the [Hunga Tonga-Hunga Ha’apai] volcano is capable of producing roughly every thousand years,” he wrote in The Conversation.

“We found evidence of two huge past eruptions … and then used radiocarbon dates to show that big caldera eruptions occur about every 1000 years, with the last one at AD1100.”

Aid agencies, including Save the Children and Oxfam, say they are ready to offer support.

Save The Children said all of its staff and volunteers in Tonga, Fiji and Vanuatu were safe and accounted for.