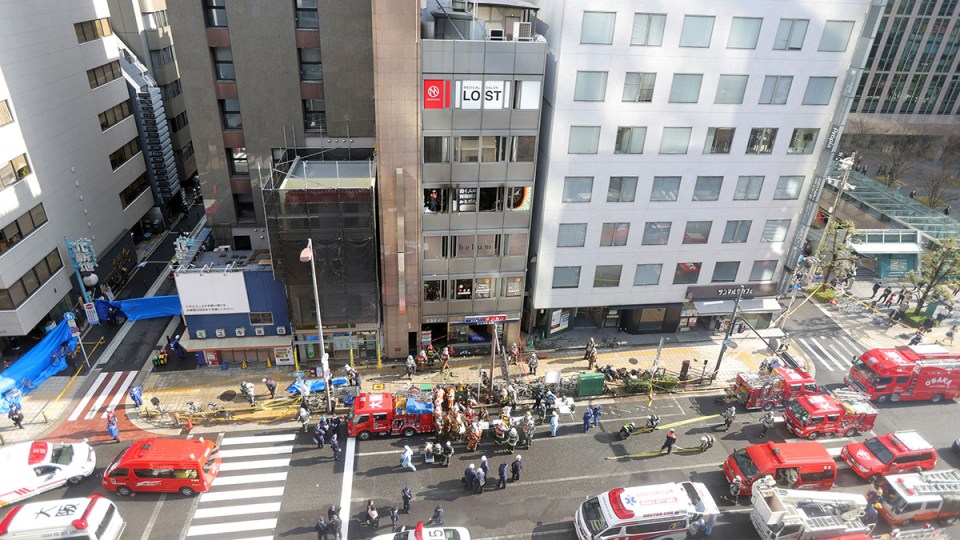 Police are investigating arson as a possible cause of a fire in a shopping district in Osaka, Japan. Photo: AP

At least 27 people are feared dead after a fire broke out at a psychiatry clinic in the Japanese city of Osaka, according to an official, and media reported that police were investigating suspected arson.

Some 27 people were in cardiopulmonary arrest, an official at Osaka’s city fire department told Reuters, the term used in Japan before a death is officially confirmed.

Another person was injured, the official said.

Three people were confirmed dead at a hospital, according to broadcaster MBS.

Police were investigating suspected arson, including reports that a man started the fire in the building, Kyodo News said, citing people involved in the investigation.

An elderly man brought a bag into the building that leaked flammable liquid and was ignited, the Yomiuri newspaper said.

The fire broke out shortly after the clinic, on the fourth floor of a multi-storey office building, opened for business at 10am on Friday and was largely extinguished within 30 minutes, public broadcaster NHK reported.

Video from NHK showed smoke pouring out of the fourth-floor windows, and the roof.

Located in a shopping and entertainment district not far from Osaka’s main train station, the building also houses a beauty salon, a clothes shop and an English-language school, NHK said. One man told the broadcaster he saw a woman calling for help from one of the windows.

An arson attack at an animation studio in the city of Kyoto in 2019 killed more than 30 people and injured dozens.