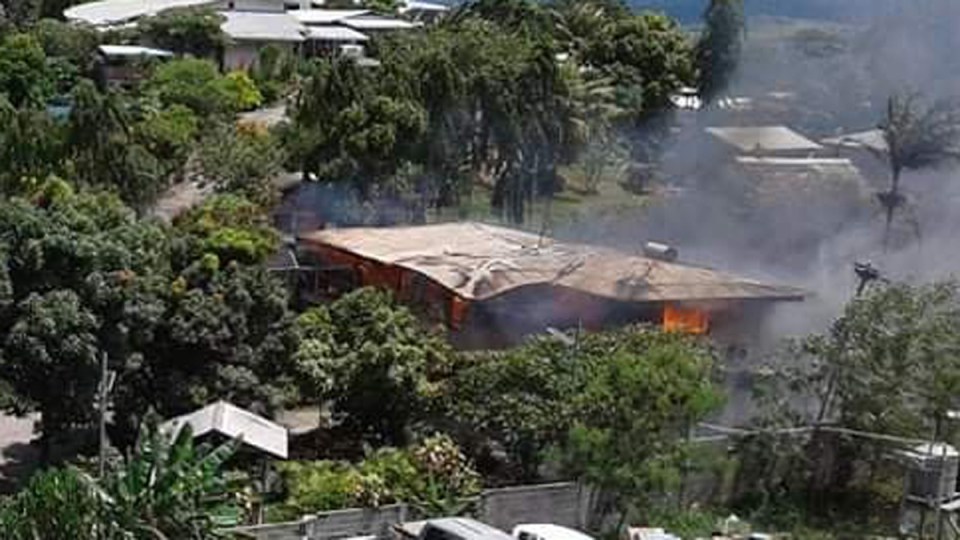 Rioters in the Solomon Islands have targeted the compound of Prime Minister Manasseh Sogavare, setting a building alight, as unrest in the capital Honiara continued on Friday.

Australian police officers arrived in the Solomon Islands on Friday, to help provide security after days of violence.

Honiare’s Chinatown was also on fire on Friday. Elsewhere, the National Parliament building, a police station and businesses have been set alight during two tumultuous days in which police failed to control the mob.

Australia has deployed 23 Australian Federal Police officers, including tactical response teams to the Pacific island nation to help with stability.

An additional 50 AFP officers and 43 Australian Defence Force members were on their way on Friday, along with a patrol boat.

The PNG government also confirmed on Friday it would send a 35-strong security team to Honiara.

“Our role is to assist the Solomon Islands police force to restore law and public order as soon as we possibly can,” Ms Andrews told ABC TV.

“This is a policing matter, not a military matter, so we are working very closely with the police force there.”

Save the Children’s Solomons country director Lisa Cuatt said there were strong fears for the safety and wellbeing of children following the destruction of Honiara High School and damage to other schools.

“The impact of this crisis on children’s education and wellbeing, in the immediate and long-term, cannot be understated or ignored,” Ms Cuatt said.

The organisation has 47 staff across four provinces in the country.

Ms Andrews said Australia’s deployment was in response to a request for help from the Solomon Islands government under a bilateral security treaty.

“We are not there to intervene in any way in domestic matters,” she said.

She estimated there were 200 Australian citizens in the country.

“We will engage with them as we need to in terms of those who might wish to leave,” Senator Payne said.

Mr Sogavare imposed a lockdown in Honiara for 36 hours along with a curfew in a bid to quell the unrest.

The lockdown ended on Friday morning.

Mr Sogavare has blamed foreign powers for encouraging the unrest in the country.

He said he stood by his government’s decision to embrace Beijing, which he described as the “only issue” in the violence, which was “unfortunately influenced and encouraged by other powers.”

External pressures were a “very big … influence. I don’t want to name names. We’ll leave it there,” he said on Friday.

“I’m not going to bow down to anyone. We are intact, the government’s intact and we’re going to defend democracy.”

But Solomons Opposition Leader Matthew Wale has accused the government of taking bribes from China, saying the people were protesting the regime’s corruption.

The widespread protests have largely started due to the Pacific nation’s decision in 2019 to switch diplomatic ties from Taiwan to China.

Media reports said people had travelled from the most populous province of Malaita to the capital because of concern about being overlooked by the national government.

The province opposed the decision to end diplomatic ties with Taiwan and establish formal links with China, resulting in an independence referendum last year that the national government dismissed as illegitimate.

Local journalist Gina Kekea said the foreign policy switch to Beijing with little public consultation was one of a mix of issues that led to the protests. There were also complaints that foreign companies were not providing local jobs.

“Chinese businesses and [other] Asian businesses … seem to have most of the work, especially when it comes to extracting resources, which people feel strongly about,” Kekea said.

Protesters had been replaced by looters and scavengers on Friday in Chinatown, Kekea said.

“It’s been two days, two whole days of looting and protesting and rioting and Honiara is just a small city,” Kekea said of the home to 85,000 people.

“I think that there’s nothing much left for them to loot and spoil now.”