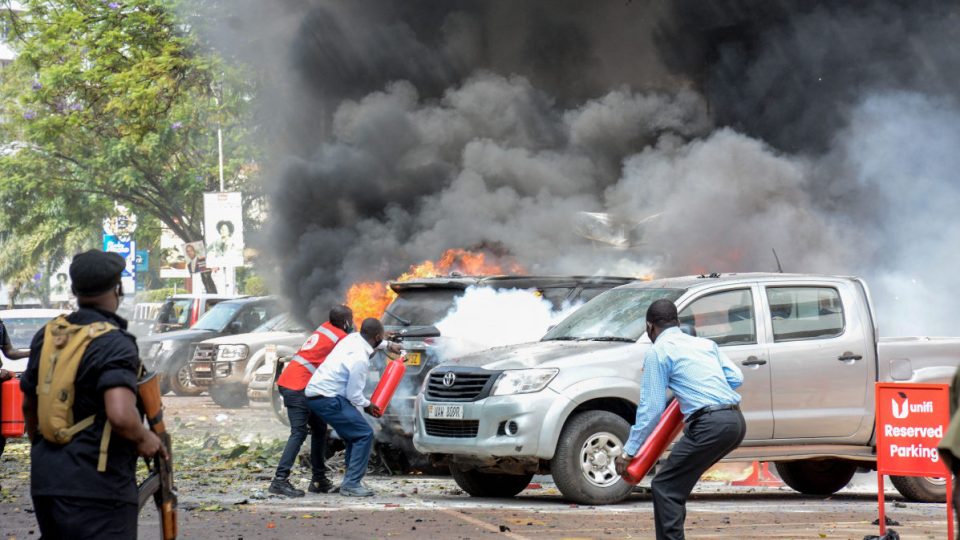 One of the bombs was planted outside the parliament building in Kampala. Photo: Getty

At least three innocent people were killed and dozens more seriously injured in what Ugandan authorities described as a co-ordinated attack by extremists.

The explosions caused chaos in Kampala as terrified residents fled the city’s centre. Reporters at the scene said people had to run past body parts as they fled.

The twin explosions occurred within three minutes of each other.

Both were carried out by attackers carrying explosives.

A possible attack on a third target was foiled by police who pursued and disarmed a suspected suicide bomber, Mr Enanga said.

One blast was near a police station and the other on a street near the parliamentary building, according to police and witnesses.

The explosion near parliament appeared to hit closer to a building housing an insurance company and the subsequent fire engulfed cars parked outside.

At least 33 people are being treated at the city’s main public referral hospital, Enanga told reporters.

Mr Enanga said the attacks bore “the hallmarks” of the work of the ADF although there was no immediate claim of responsibility.

At least 150 planned attacks have recently been defused, he said, describing a “domestic terror group” eager to carry out more attacks.

The ADF has long been opposed to the rule of longtime President Yoweri Museveni, a US security ally who was the first African leader to deploy peacekeepers in Somalia to protect the federal government from the extremist group al-Shabab.

In retaliation over Uganda’s deployment of troops to Somalia, the group carried out attacks in 2010 that killed at least 70 people who had assembled in public places in Kampala to watch a World Cup football game.