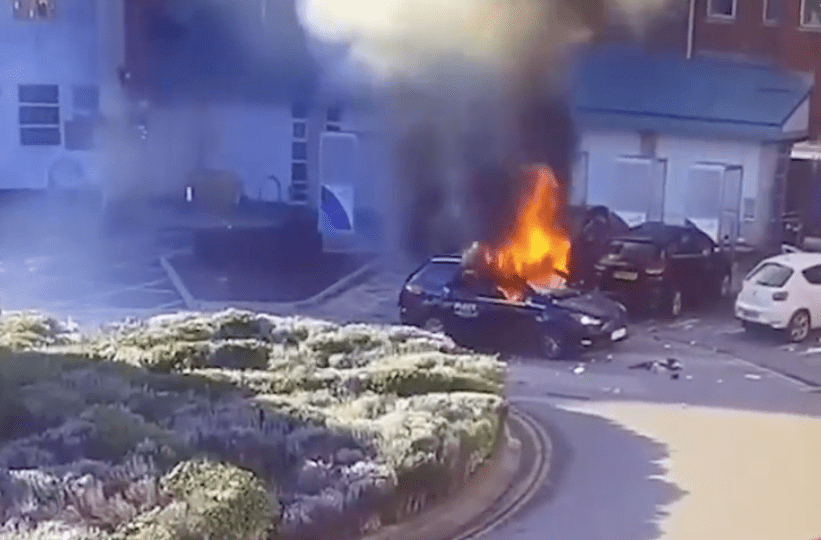 Dramatic CCTV footage shows the taxi driver running from the smoking car before it bursts into flames. Photo: Twitter

British authorities believe another terror attack is “highly likely”, as more details emerge about an explosion outside a Liverpool hospital.

Police say a man had hailed a taxi and asked to be driven to the Liverpool Women’s Hospital, where he then set off a homemade bomb.

The taxi driver, David Perry, has been called a hero after it was revealed he might have locked the passenger’s doors when the man started behaving suspiciously – a move that potentially foiled the suspected terrorist’s plans.

Mr Perry’s wife Rachel said that while there were rumours about her husband’s heroism the truth was that he was “lucky to be alive”.

“The explosion happened whilst he was in the car and how he managed to escape is an utter miracle,” Ms Perry wrote on Facebook.

“He certainly had some guardian angels looking after him.”

CCTV footage obtained by The Sun newspaper shows the driver running from the taxi as it fills with smoke near the hospital entrance.

Onlookers attempt to help, appearing to check the car for other occupants, before the taxi is engulfed in flames.

Police said they believed they knew the identity of the passenger, who died in the explosion, but could not disclose it.

“Our inquiries indicate that an improvised explosive device was manufactured, and our assumption so far is that it was built by the passenger in the taxi,” Assistant Chief Constable Russ Jackson of Counter-Terrorism Policing Northwest said.

“Although the motivation for this incident is yet to be understood, given all the circumstances, it has been declared a terrorist incident.”

Earlier, the Liverpool mayor told BBC radio that Mr Perry had locked the suspect inside the taxi. Mr Jackson said he could not confirm that detail.

The explosion occurred just before 11am on Sunday (local time), when a Remembrance Day service to commemorate war dead was being held at nearby Liverpool Cathedral.

“We cannot at this time draw any connection with this but it is a line of inquiry which we are pursuing,” Mr Jackson said.

Mr Jackson said “significant items” had been found during searches of properties connected to the suspect and the men who were arrested.

Police detonated an explosive device they found during one search.

Mr Johnson will chair a meeting of the government’s emergency committee, to discuss the blast.

Sunday’s explosion is the second suspected terror attack in the past month.

In October, a 25-year-old man was charged under Britain’s Terrorism Act with the murder of Conservative MP Sir David Amess.

Home Secretary Priti Patel said the government had increased the terror threat level because of the two attacks within a month of each other.

But Ms Patel provided no further details about any information police had about other attacks.

“Our security and intelligence services prevent all sorts of acts, day in, day out,” she said.

“They understand the landscape, they see context, they see all sorts of things that keep our country safe and secure every single day and that work will continue.”