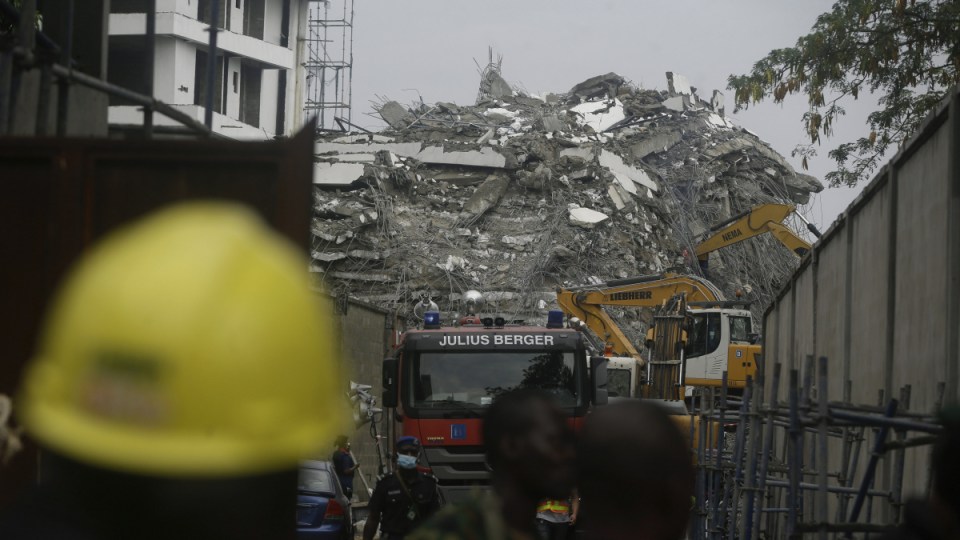 At least 16 people are dead after an apartment building under construction collapsed in Nigeria. Photo: AAP

Rescuers are combing through the rubble of a high-rise building in Nigeria’s commercial capital Lagos in search of survivors a day after it collapsed while under construction, as the death toll rose to 16 with scores reported missing.

The Lagos state government said it had put its chief architect on indefinite suspension and launched an independent investigation of the causes of the collapse of what was to have become a high-end apartment block.

Emergency services braced for a second night of work on Tuesday as earth-moving equipment lifted chunks of masonry at the site in the affluent neighbourhood of Ikoyi. Large trailers were brought in to help move debris, blocking one of Ikoyi’s main roads.

Building collapses are frequent in Africa’s most populous country, where regulations are poorly enforced and construction materials often substandard.

Lagos state government had sealed off the building site in June for failing to meet structural requirements and demanded the anomaly be corrected before construction could proceed, state deputy governor Obafemi Hamzat said in a statement. He did not say whether that problem had been rectified.

Sixteen bodies, including the assistant of the building’s owner, have been recovered so far while nine people have been pulled out alive, emergency services said, as excavators sifted rubble from the heaps of shattered concrete and twisted metal where the building once stood.

Mr Hamzat said the number of people trapped was unknown but that interviews with workers indicated up to 40 were on site when the building collapsed, much lower than an initial figure of 100 given by witnesses on Monday.

Agitated families whose loved ones were missing gathered nearby. Some wailed and others prayed in small groups for the safe return of their relatives.

As tempers flared, a few got into a scuffle with government officials, demanding to be allowed to help with the search effort.

High-end apartments have been springing up in Ikoyi, and the collapsed building was part of three towers being built by private developer Fourscore Homes, where the cheapest unit was selling for $1.6 million.

The project developer and owner of Fourscore Homes, Olufemi Osibona, told a local news channel in August that he had developed buildings in the London districts of Peckham and Hackney and that the Ikoyi apartments were the start of bigger projects he planned in Nigeria.

Mr Osibona could not be reached for comment on Tuesday. Local media reports said he may have been among those trapped.