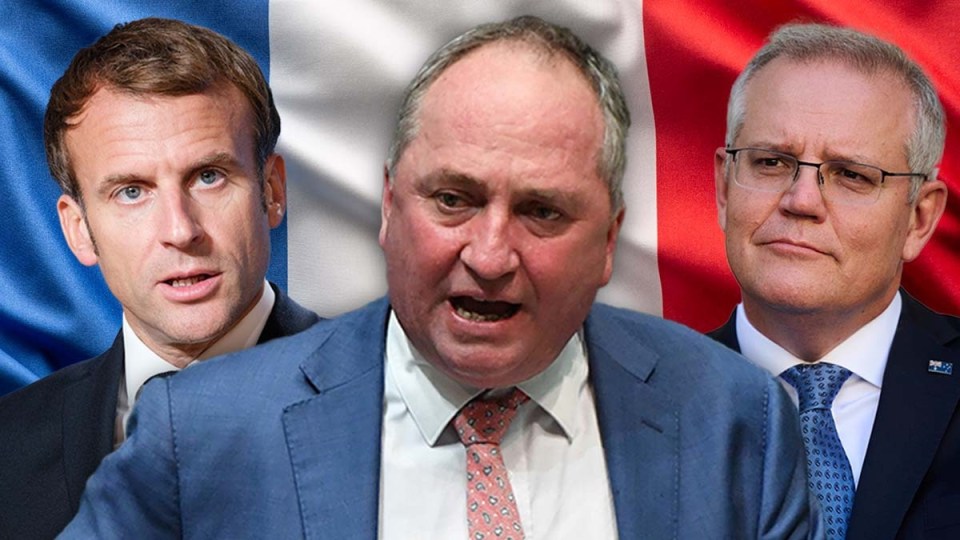 The French President did not mince words when asked whether he thought Scott Morrison lied. Photo: TND

Barnaby Joyce has urged Emmanuel Macron to “move on” after the French President accused Scott Morrison of lying to him over the scrapped $90 billion submarine contract.

Mr Joyce, the acting Prime Minister while Mr Morrison is in Europe for the G20 and COP26 climate summit, admitted “in hindsight” that the government’s dealings over the subs could have been better handled, following criticism from France and the United States.

“I’m going to back the Prime Minister in,” Mr Joyce said.

“It was a contract. We didn’t steal an island. We didn’t deface the Eiffel Tower.”

Despite Mr Morrison’s attempts to mend the relationship and talk up the thawing tensions, the French leader did not hold back when he gave his thoughts on the PM’s conduct.

Australian reporters asked whether he thought Mr Morrison had lied about his intentions, to which Mr Macron replied: “I don’t think, I know”.

“I think this is detrimental to the reputation of your country and your Prime Minister,” he said.

It followed photographs of Mr Macron appearing to scowl at Mr Morrison when the Australian PM tapped him on the shoulder when they crossed paths on Sunday. However, later photographs showed Mr Macron smiling as the pair shook hands.

Mr Morrison later told reporters he didn’t agree with Mr Macron’s assertions and would “always stand up for Australia’s interests”.

“It’s not true,” he replied, when asked about Mr Macron’s comments.

“As I’ve said on numerous occasions, I explained very clearly that the conventional submarine option was not going to meet Australia’s interests.”

“There were stories that have been floating around the paper long before the cancellation of the submarine contract,” he said.

“I hope that President Macron understands that ultimately, Australia and France have got so much more in common and so much into the future than a contract which is now in the past … I’m certain that with time, like all things, we can get over this and move on.”

Mr Joyce claimed ditching the French subs and going for nuclear boats was the “best platform”, but admitted that things could have been handled better.

In Rome, when asked whether he could trust Mr Morrison again, Mr Macron replied: “We will see what he will deliver”.

Relations between the two leaders soured in September, when the French declared they had been “stabbed in the back” by the Morrison government when it announced it was tearing up its pact with Paris to design and help build 12 diesel submarines.

Australia has instead opted for an agreement with the US and UK on nuclear-powered subs.

At a press conference just minutes after Mr Macron’s comments to the Australian media, Mr Morrison said the French President should have been aware of the plans to scrap the deal.

“I was very clear that what was going to be provided to us was not going to meet our strategic interest and there was still a process we were engaged in, and we then engaged over the months that followed, and then we communicated to him our ultimate decision,” he said.

“I’ve been very clear about the way I’ve communicated about this, we had dinner together.”

It comes after US president Joe Biden admitted the orchestration of the AUKUS pact was “clumsy” but told Mr Macron that he “was under the impression that France had been informed long before” the announcement about Australia’s plans.

“I went up and just put my arm on his shoulder, I said ‘g’day, Emmanuel, and look forward to catching up over the next couple of days’, which I assure you, that’s the way these things work,” Mr Morrison said on Sunday.

“He was happy to exchange those greetings, and we’ve known each other for a while. But you know, it’s just the process of being on the road back.”