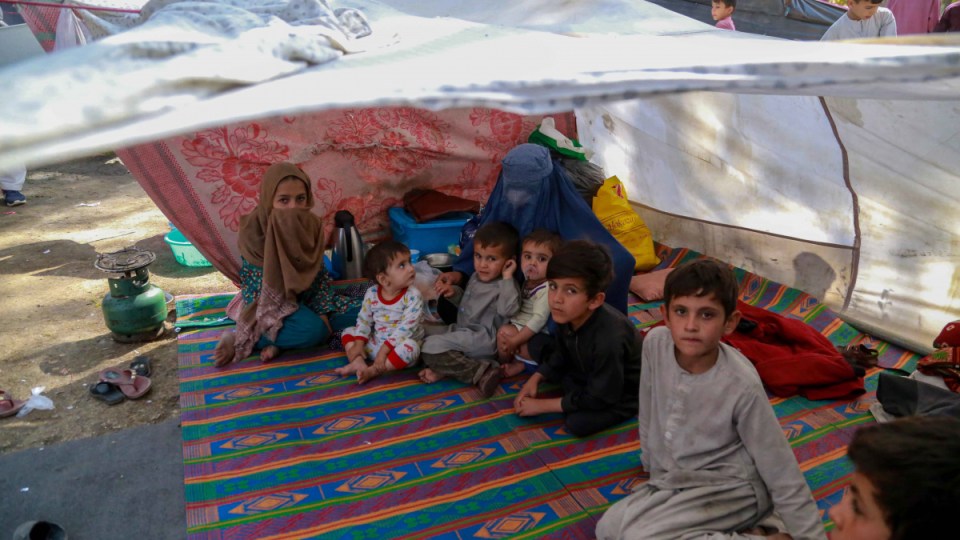 A virtual G20 summit is being held to discuss Afghanistan and a looming humanitarian disaster there. Photo: EPA

The leaders of the G20 countries have tasked the United Nations with co-ordinating aid for Afghanistan during a special summit although they were not united on how to deal with the country’s Taliban rulers.

Italy holds the rotating G20 presidency this year and Prime Minister Mario Draghi called the summit to address the burgeoning disaster in Afghanistan.

He said the attendees also agreed that the crisis-ridden country should recognise human rights, especially women’s rights and not become a haven for terrorists.

The situation in Afghanistan has dramatically deteriorated since the Taliban seized power in the country following the withdrawal of US and other foreign troops after a nearly 20-year occupation.

Governments worldwide are now debating how best to help the population as 3.5 million people are internally displaced.

Other concerns include whether to recognise the Taliban, given the Islamists’ dire record on human rights.

The European Union will give a total of one billion euros ($AUD1.6 billion) in aid to support Afghans in their home country and those who have fled elsewhere in the region, European Commission President Ursula von der Leyen announced.

The EU had already promised 300 million euros in humanitarian aid.

A further 250 million euros will go to support healthcare operations while additional EU money will flow to neighbouring countries that have taken in Afghans.

The US wants to continue to provide diplomatic, humanitarian and economic support to the people of Afghanistan together with the international community, the White House said in a statement following the summit.

“It can not and must not be the international community’s goal to watch as 40 million people fall into chaos either because electricity cannot be supplied or a financial system is non-existent,” she said after the summit.

She noted that the International Monetary Fund and the World Bank have a major task to prevent the country’s financial system from collapsing.

“The international community does not have the luxury to turn its back on the Afghan people or leave this country to its own fate,” Turkish President Recep Tayyip Erdogan told the summit.

Mr Tayyip offered to create a working group under the G20 to tackle migration issues, suggesting that Ankara chair this group.

He said Turkey, which already hosts nearly five million refugees, can not shoulder a new migration wave burden from Afghanistan.

Both countries gave their support early to the Taliban, which looks likely to rely on Chinese funding.

Meanwhile, officials in Beijing called for all sanctions on Afghanistan to be lifted, along with the provision of international humanitarian support.

China’s Foreign Minister Wang Yi said the G20 had to respect Afghanistan’s sovereignty, independence and territorial integrity and “let the Afghan people decide their fate,” he was quoted as saying by state television.

A country should choose its own development path, he said.

Imposing ideology and military intervention to interfere in internal affairs would only lead to constant turbulence and severe humanitarian misfortune, Mr Wang said.

He called on the international community to deal with Afghanistan “in a rational and pragmatic way,” saying the country should be helped to build an “inclusive political structure” and develop a rational domestic and foreign policy.

Asked whether G20 leaders would recognise the Taliban, Draghi said governments were far from being ready to do so.

“The Taliban will be judged by what they do, not what they say,” he said.

Ms Merkel also said Germany was not planning to recognise the Taliban but noted talks were necessary given the need to fight terrorism, saying Afghanistan should not become a potential danger to the world.

The conference was held as concerns grow that the country’s economy, health and banking systems are on the brink of collapse.

Afghanistan urgently needs financial aid from abroad, otherwise many fear catastrophe, given a looming drought and the winter ahead.

The UN recently warned one million Afghan children are at risk of starvation as winter approaches.

More than half of the children under the age of five are at risk of malnutrition.

About 18 million Afghans – half the total population – depend on humanitarian aid, according to the UN, with 93 per cent of households lacking enough to eat.

‘It means so much’: Celebrities share their abortion stories after Roe v Wade
Migrants killed by French train were ‘sleeping on tracks’
Today's Stories