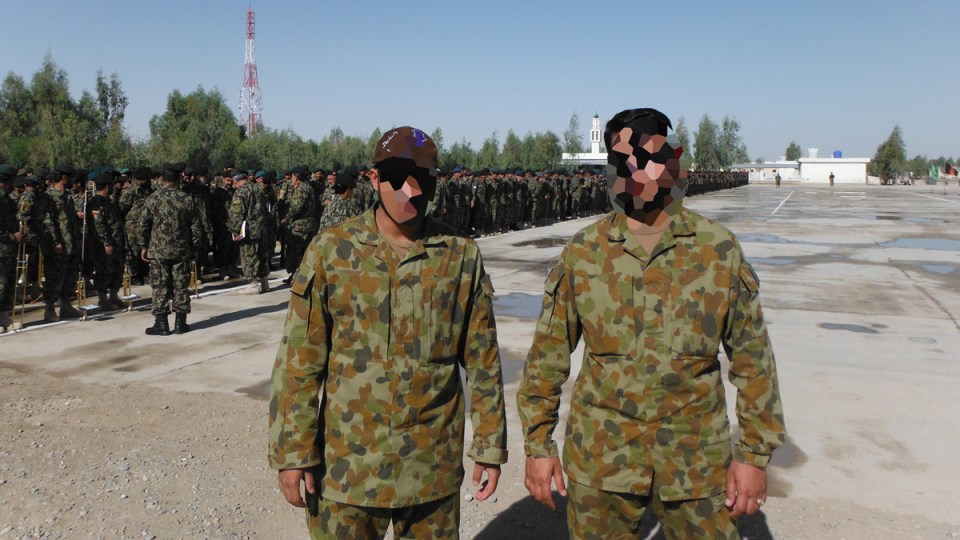 Interpreters who TND has de-identified for their protection. The Taliban threatens their lives as they wait for visas. Photo: Jason Scanes

Last month, Hassan woke to find a letter outside his home in Afghanistan, which he shares with his wife and baby daughter.

We know who you are, we know where you live, and we’re coming to kill you.

He didn’t need to ask who sent it.

The Taliban had already started taking over Afghanistan amid the withdrawal of US troops and allied forces.

Since 2013, when Australian combat troops officially withdrew from Afghanistan, more than 1400 visas have been granted to Afghans under the Australian government’s Locally Engaged Employees (LEE) program.

Hassan is among at least 200 interpreters, contractors and chefs employed by the Australian Defence Force (ADF) who are still waiting.

That’s according to Jason Scanes, the founder of veterans advocacy group Forsaken Fighters.

Mr Scanes worked alongside Hassan for 10 months in Afghanistan, and has been contacted by dozens of other Afghan workers with requests for assistance.

“It’s become particularly dangerous for those who associated themselves with Australian forces following the release of the Brereton inquiry“, he told The New Daily.

“The Taliban is using that as propaganda and saying ‘These guys are high-profile targets’.”

In an opinion editorial published in The Daily Telegraph on Wednesday, Foreign Affairs Minister Marise Payne and Defence Minister Peter Dutton argued the risk of an “insider attack” on Australian soil would be too high if the government approved visas for every Afghan applying for protection.

Their article followed concerns that Afghan translators, drivers and other locals who helped ADF personnel were being unfairly rejected, or facing long delays, for humanitarian visas.

“We employed them to do a job and to fight against a common enemy,” Brad Fewson, a terminally ill veteran of 21 years, told TND.

“I can guarantee you, their life is done. It’s over for them … The Taliban is coming back in and effectively, we’re leaving a soldier behind. That’s what we’re doing.”

Since April 15, more than 230 people in Afghanistan – including their family members – have been granted a visa under the LEE program, a spokesperson for the Department of Home Affairs said in a statement to TND.

Time is running out

Afghan allies don’t have the luxury of waiting for sluggish visa approval processes.

As the Taliban terrorist group continues to close in on provincial capitals, anyone linked to foreign forces is in the firing line.

“The Taliban have not only engaged in targeted killing, but have made it clear that they regard those who have been working with what they call ‘infidels’ as legitimate targets,” said Emeritus Professor William Maley, an expert in Afghan politics and diplomacy at the Australian National University.

“The situation in Afghanistan has been deteriorating rapidly … Because of this, routine bureaucratic procedures are no longer appropriate as a way of protecting those in danger.”

In one video, a voice can be heard saying, “Surrender, commandos, surrender” as several members of an Afghan Special Forces unit emerge from a building, clearly unarmed.

Gunfire erupts and at least a dozen men are seen shot to death over cries of “Allahu Akbar” – God is great.

In a statement to TND, Labor’s defence spokesman Brendan O’Connor said Australia has a “moral obligation” to help the Afghan interpreters who assisted our troops during the war effort.

Although acknowledging “every application must be considered on its individual merits”, he said the Morrison government “must not hide behind bureaucracy to delay the processing of these visas”.

Mr Scanes suggested the Morrison government conduct early assessments of Afghan interpreters who have a legitimate claim, and remove them from harm’s way before “getting into the detailed stuff” to save time.

“To do anything less for these Afghans is negligent,” he said.

“We should not be at a stage right now – at five minutes to midnight – where the government has no plan for this.”

Meanwhile, US President Joe Biden this week launched Operation: Allied Refuge to help relocate thousands of Afghan interpreters who worked for the US.

The value of Afghan translators

Alex, who did not want his real name published, is an Australian veteran who worked closely with Afghan interpreters during the war.

Not only were translators “extremely important” in helping troops overcome language barriers and de-escalate tensions, they also helped us understand sensitive cultural differences, he said.

“You could easily and unintentionally offend an Afghan soldier by simply speaking in a manner that could make him feel belittled or embarrassed in front of his fellow Afghan men,” Alex told TND.

For some unlucky westerners, that cultural slip-up could be a death sentence.

To build rapport with a potential Afghan translator, Alex said he would often have to sit down with them a “dozen times”, drink chai and share family histories before striking a deal.

Some of the interpreters held “extremist religious beliefs” that were incompatible with Australian values, Alex said, particularly their views about women.

“Not all of our translators were model citizens that would be suitable for life in Australia,” he said.

“This is the fine balancing act.”

‘It’s over for them’: Veterans blast delays to save Afghan interpreters