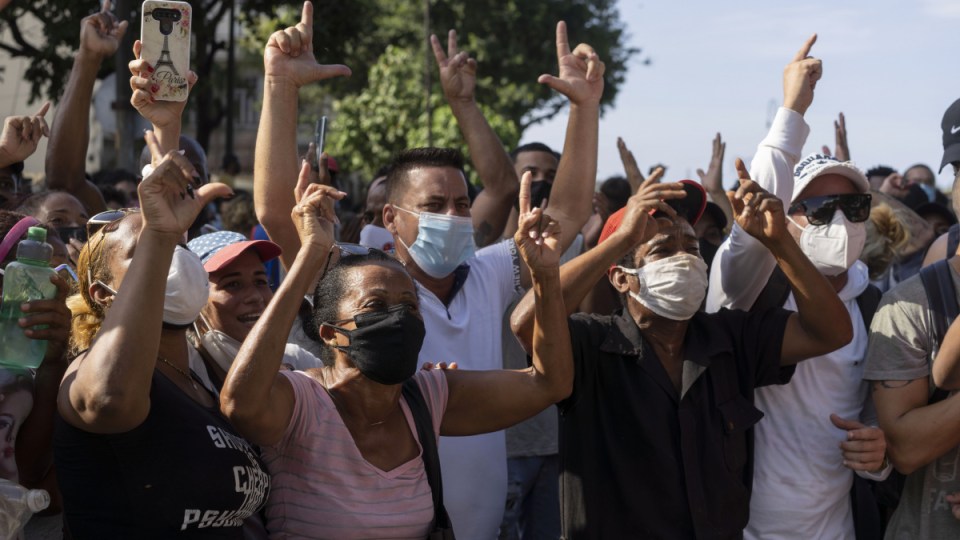 Cuban President Miguel Diaz-Canel has blamed weekend protests on US “economic asphyxiation” and social media campaigns by a minority of counter-revolutionaries while US President Joe Biden says he stands with the Cuban people.

The protests erupted amid Communist-run Cuba’s worst economic crisis since the fall of former ally Soviet Union, with the tightening of decades-old US sanctions exacerbating shortages of food and medicine as well as power outages amid a surge in COVID-19 infections.

“In the last few weeks the campaign against the Cuban revolution has increased in social media, drawing on the problems and shortages we are living,” Mr Diaz-Canel said in a televised address alongside his cabinet.

A minority of counter-revolutionaries were fomenting unrest, he said, denouncing vandalism that took place across various cities on Sunday (local time) in Cuba’s biggest anti-government demonstrations in decades.

“They threw stones at foreign currency shops, they stole items… and at police forces, they turned over cars – a totally vulgar, indecent and delinquent behaviour,” he said.

Mr Diaz-Canel said “US-hired mercenaries” had organised Sunday’s mass protests as part of a goal of “fracturing the unity” of the Cuban people, although he acknowledged that some “confused” Cuban citizens lacking information about the country’s problems had participated in the demonstrations.

The wave of protests began on Sunday in San Antonio de Los Banos, 30 kilometres east of Havana, and later spread to other localities on the island, with thousands of Cubans shouting “freedom!”.

The streets of Havana appeared quiet the following morning, although special forces patrolled its seafront boulevard.

We stand with the Cuban people as they bravely assert their fundamental and universal rights, and as they all call for freedom and relief from the tragic grip of the pandemic and from the decades of repression and economic suffering. https://t.co/KGY3MFfsw0

In a statement on Tuesday morning (Australian time), Mr Biden said the US stood with the people of Cuba in their call for freedom and relief from the coronavirus pandemic and decades of repression.

“The Cuban people are bravely asserting fundamental and universal rights. Those rights, including the right of peaceful protest and the right to freely determine their own future, must be respected,” Mr Biden said.

“The United States calls on the Cuban regime to hear their people and serve their needs at this vital moment rather than enriching themselves.”

During his campaign for the White House, Mr Biden promised to ease sanctions on Cuba but has yet to do so.

The US tightened sanctions on Cuba under Donald Trump, Mr Biden’s predecessor, including restricting key remittances in the middle of the pandemic.

Mr Diaz-Canel did not directly address the US statement, issued during his address.

But he attacked what he called US hypocrisy for expressing concern when it was fuelling the crisis in Cuba with its trade embargo.

“Is it not very hypocritical and cynical that you block me… and you want to present yourself as the big saviour?” he said.

“Lift the blockade … and then we will see what this people, that has achieved an immense social work despite what is practically a war economy, is capable of.”

Mexican President Andres Manuel Lopez Obrador gave Cuba backing on Monday, saying the US economic embargo on the island should be ended to help its people.

“The truth is that if one wanted to help Cuba, the first thing that should be done is to suspend the blockade of Cuba as the majority of countries in the world are asking,” Lopez Obrador said.

Cuba blames US ‘asphyxiation’ for unrest