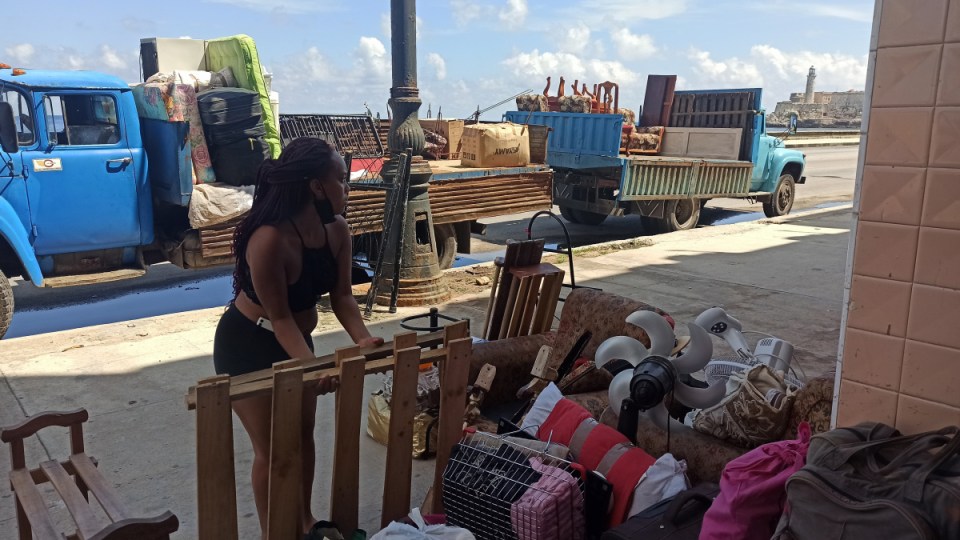 Residents in the lower areas of Havana's Malecon promenade evacuate before the arrival of Tropical Storm Elsa. Photo: AAP

The Cuban government opened shelters and moved to protect sugarcane and cocoa crops ahead of the storm.

Most of those evacuated on Sunday (local time) went to relatives’ homes, although some took shelter at government facilities. Hundreds living in mountainous areas took refuge in natural caves prepared for the emergency.

The storm’s next target is Florida, where Governor Ron DeSantis declared a state of emergency in 15 counties, including Miami-Dade where a high-rise apartment building collapsed last week.

Late on Sunday afternoon, Elsa’s centre was about 20 kilometres west of Cabo Cruz in Cuba and was moving north-west at 22km/h. It had maximum sustained winds of about 95km/h, according to the National Hurricane Centre in Miami.

The centre said the storm was expected to gradually weaken while moving across Cuba on Monday.

“After Elsa emerges over the Florida Straits and the south-eastern Gulf of Mexico, some slight restrengthening is possible,” it said.

The storm killed one person on St Lucia, according to the Caribbean Disaster Emergency Management Agency.

A 15-year-old boy and a 75-year-old woman died on Saturday in separate events in the Dominican Republic after walls collapsed on them, according to a statement from the Emergency Operations Centre.

Elsa was a category one hurricane until Saturday morning, causing widespread damage on several eastern Caribbean islands on Friday as the first hurricane of the Atlantic season.

Among the hardest hit was Barbados, where more than 1100 people reported damaged houses, including 62 homes that completely collapsed.

The government promised to find and fund temporary housing to avoid clustering people in shelters amid the pandemic.

Downed trees also were reported in Haiti, which is especially vulnerable to floods and landslides because of widespread erosion and deforestation.

A tropical storm warning was in effect for much of Cuba, Jamaica and the Florida Keys from Craig Key westward to the Dry Tortugas. A hurricane watch was issued for the Cuban provinces of Camaguey, Granma, Guantanamo, Holguin, Las Tunas, and Santiago de Cuba.

Elsa is the earliest fifth-named storm on record. It also broke the record as the tropics’ fastest-moving hurricane, clocking in at almost 50km/h on Saturday morning, Brian McNoldy, a hurricane researcher at the University of Miami, said.