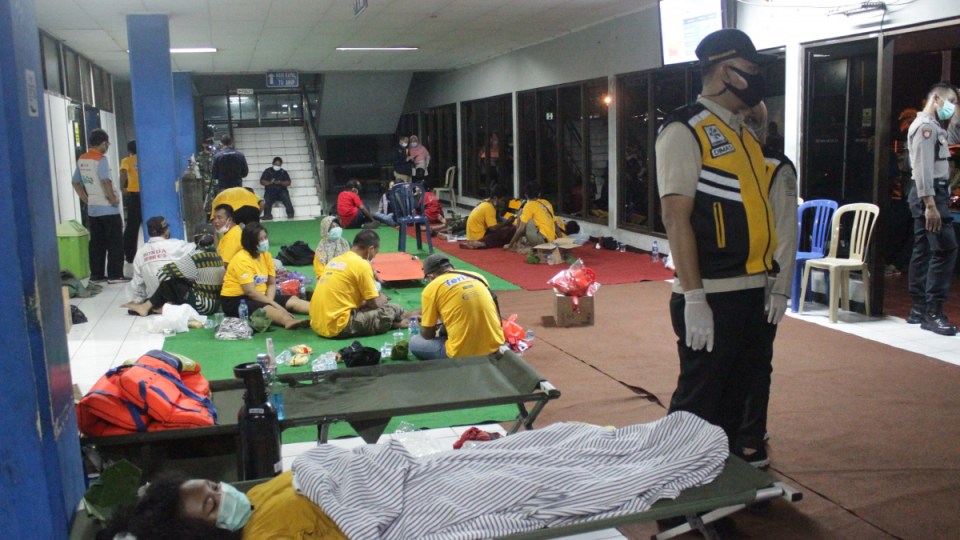 Rescuers found 44 people drifting in choppy waters, many of them unconscious, after the ferry sank on its way to Bali. Photo: AAP

At least six people have been killed when a ferry sank in rough seas off the coast of Bali.

Rescuers managed to find 44 of the people on board – many of them pulled from the water unconscious – and are still searching for three passengers.

The ferry had been bound for Bali’s Gilimanuk port, a 50km trip, with 41 passengers and 12 crew members.

It started taking on water at around 7pm (local time) and sank about 30 minutes later.

Jembrana district police chief, I Ketut Adiwibawa told MetroTV that 6 people were killed in the incident. The survivors were taken to both East Java's Ketapang and Bali's Gilimanuk seaports. pic.twitter.com/aSFkZwRcdE

Rescuers were battling waves up to four metres high in darkness to search for the missing people.

Footage from one boat at the scene shows rescuers throwing life buoys and guiding survivors to safety.

Ferry tragedies are common in Indonesia, an archipelago of more than 17,000 islands, with weak enforcement of safety regulations often to blame.

In 2018, an overcrowded ferry sank in North Sumatra province, killing 167 of the 200 people on board.

In one of the country’s worst recorded disasters, an overcrowded passenger ship sank in February 1999 with 332 people aboard. There were only 20 survivors.