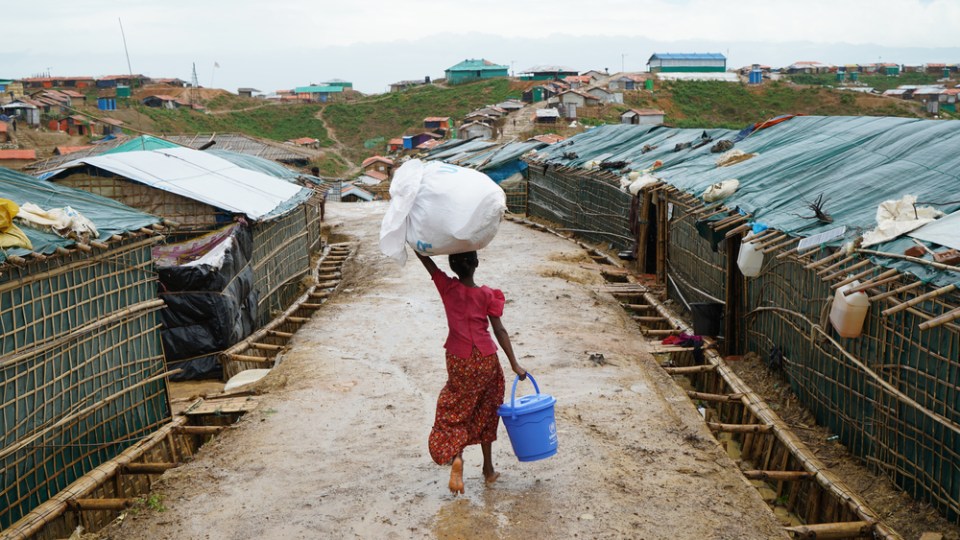 One year on since the biggest influx of Rohingya refugees to Bangladesh, the Rohingya face an uncertain future. Photo: Dalila Mahdawi/MSF
opinion

Nurul Islam is a 40-something-year-old father-of-four.

He was among the 700,000 Rohingya who fled across the Naf river into Bangladesh, escaping targeted military violence in Rakhine State in August 2017.

I first met him when he and his family were crossing the river, constantly negotiating each footstep with a child in one hand, the other tightly gripping a rope that tied him to another person up ahead.

He ‘chose’ this way to flee.

Some stayed back in Myanmar.

I remember this clearly.

Nurul made several ‘choices’ that day – he ‘chose’ to leave his home in Rakhine State.

He ‘chose’ to take a comb, soap, two lungis (traditional sarong-like garment), a pot, and a jerry can of water.

He even ‘chose’ which child he would help while crossing that river.

The following day, UNHCR officials and the Bangladeshi military told Nurul that he could ‘choose’ any plot of land west of the N1 highway that he and his family could call home.

Nurul walked four hours to find a plot, in what would later become the largest and most over-crowded refugee camp in the world.

Nurul now lives about 500 metres from the N1 highway after ‘choosing’ to pay a local leader money to rent a plot of land, so his children can safely attend reading classes nearby instead of walking long distances in the dark and/or alone.

None of the 400,000 school-aged Rohingya refugee children in Cox’s Bazar camps have proper access to certified primary, secondary or tertiary education.

But they can ‘choose’ to attend unaccredited learning sessions every week, which are not recognised in either Bangladesh or Myanmar.

Similarly, when looking at employment ‘choices’, Rohingya are unable to legally work in the refugee camp.

Nurul however ‘chooses’ to volunteer his time with a non-government organisation where he conducts surveys to determine the number of children malnourished in a nearby block of 400 houses.

At the end of March this year, a large fire swept through the refugee camp, leaving 45,000 Rohingya without a home and losing all their possessions for the second time.

At the same time, some refugees are being pressured to relocate to Bhasan Char, an island in the Bay of Bengal, assured that they ‘have a choice’.

This island being a low-lying silt deposit that formed in 2006, potentially vulnerable to floods and cyclones.

Choices have become an elaborate illusion for the Rohingya.

Today, like many other Rohingya living in Cox’s Bazar, Nurul has been diagnosed with anxiety and insomnia related to post-traumatic stress disorder.

It’s the daily and unforgiving stressors associated with life in the camps, in addition to the historic systematic human rights violations, and traumatic events in Myanmar that have contributed to not just Nurul’s mental state, but a collective experience by the Rohingya.

Médecins Sans Frontières/Doctors Without Borders (MSF) has been providing mental health support to the community since 2009.

The package of care includes psychiatric services, as well as psychosocial and individual, family, and group counselling sessions.

In 2020, MSF teams saw a 61 per cent increase in the number of people seeking mental health services on the year prior.

The bottom line is that the need for mental health care exceeds the services offered to the Rohingya.

A recent study found there was a clear link between symptoms of depression and anxiety in the Rohingya community and chronic systematic dehumanisation and exclusion.

This includes for example, policies restricting the ability to move, marry, study or have children.

Indeed, despite all the ‘choices’ Nurul and other refugees apparently have, the Rohingya have very little ability to make their own choices.

Recovery-oriented mental health programs outline that self-determination is possible when the needs of autonomy, efficient problem solving and ability to work and provide for one’s family, love, play are all satisfied.

The capacity to do this is a human right and is critical for the mental health of all refugees including the Rohingya.

The Rohingya are in deficit of individual and collective mental health; this is an acute emergency.

Since the 2017 influx, there has been very little effort by the international community to address the discrimination faced by the Rohingya.

Furthermore, there has been no meaningful progress made to enable them to be resettled or return to their homes in Myanmar safely if they so choose.

As a Tamil, I am very aware of the repercussions of failed international action.

We were left with no choice but to live outside Sri Lanka.

Some are still waiting to be granted asylum in Australia, after ten years.

I can speak first-hand to the long-lasting effect of human rights violations on the mental health of refugees.

But while my community is picking up the pieces from a brutal civil war, with hundreds of thousands resettling outside of Sri Lanka, the Rohingya have been denied citizenship, let alone an opportunity to resettle.

Addressing mental health and healing from traumatic events requires the ability to make meaningful choices about your own life.

The Rohingya have suffered intergenerational trauma for decades, and just like it is for Nurul, their present situation is an example of international law failing to protect them.

No humanitarian assistance or tokenistic diplomatic pressure is going to replace what is actually needed: Fully recognised citizenship and all the protections and rights afforded by it for the Rohingya in Myanmar.

If that isn’t possible, then they should be afforded the full protection of international law and resettled in peace in Bangladesh, India, Malaysia or elsewhere.

The problem is, they have little choice in the matter.

Arunn Jegan is Advocacy Coordinator with Médecins Sans Frontières Australia. He has worked as Head of Mission and Emergency Coordinator in Yemen, Syria, Venezuela and Bangladesh with MSF.

Humanitarian crisis: Why choice is nothing but an elaborate illusion for the Rohingya