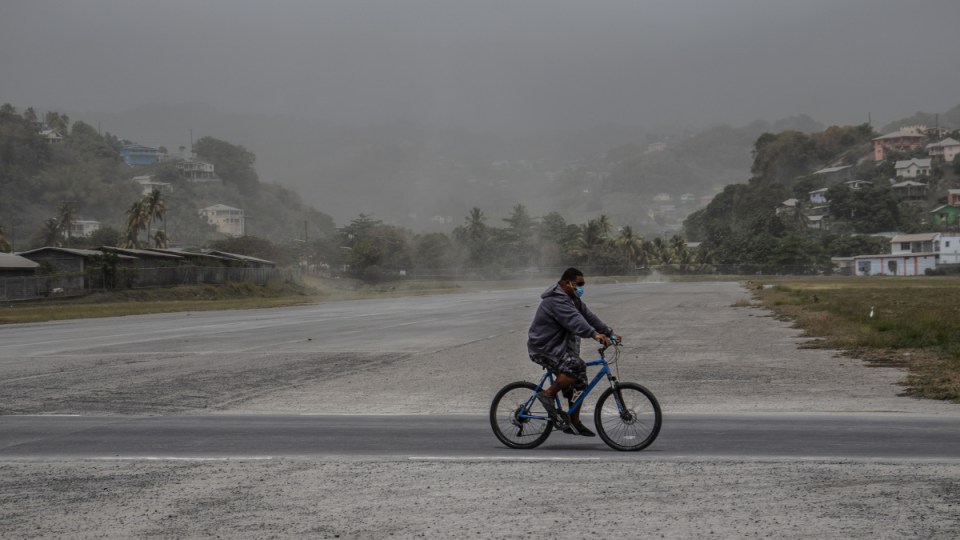 A man rides his bicycle past fields covered with volcanic ash a day after the La Soufriere volcano erupted. Photo: AAP

The Caribbean island of St Vincent has been left without clean water and electricity after last week’s eruption of the La Soufriere volcano.

In addition, about 20,000 evacuees from the island nation still need shelter, United Nations spokesman Stephane Dujarric said on Monday, citing reports from the Office for the Coordination of Humanitarian Affairs.

The volcano, which is in the north of the island, erupted last Friday, emitting a 10 kilometre high column of smoke.

“The eruption has affected most livelihoods in the northern part of the island, including banana farming, with ash and lava flows hampering the movement of people and goods,” Mr Dujarric said.

Tremors were still being felt at the weekend and there was another large explosion on Monday, according to the UWI research centre in Trinidad.

OCHA has warned “explosions and accompanying ashfall, of similar or larger magnitude, are likely to continue over the next few days.”

St Vincent, the main island of the state of St Vincent and the Grenadines, has a population around 100,000.

According to the UN, some 3500 people were taken into 85 emergency shelters.

The 1178 metre tall La Soufriere is the only active volcano on St Vincent.