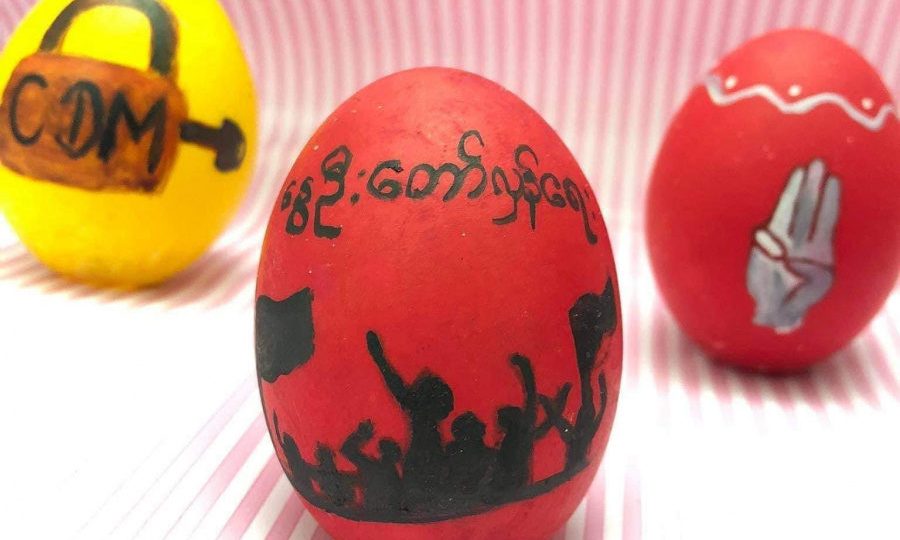 Protesters in Myanmar used Easter eggs to get across their messages.

Opponents of military rule in Myanmar have made the Easter egg a symbol of defiance in the latest peaceful protest against the military coup that resulted in the detention of the country’s elected leader.

Protesters have also mounted a civil disobedience campaign of strikes, with thousands of locals across industries and workplaces – from medicine and engineering to textile factories – downing tools.

The protesters are being met with violence, with latest figures from the Assistance Association for Political Prisoners (AAPP) showing 557 people have been killed.

Those who speak out even without actively marching on the streets are also at risk of being detained – but they continue to find creative ways to get their messages across.

At the weekend, the military attempted to stop those messages being broadcast; it ordered internet providers to cut wireless broadband so it could control the flow of information.

Authorities have also issued arrest warrants for nearly 40 celebrities known for opposing military rule, including social media influencers, singers and models, under a law against inciting dissent in the armed forces.

One of those charged, blogger Thurein Hlaing Win, told Reuters he was shocked to see himself branded a criminal. He has gone into hiding to avoid arrest.

“I didn’t do anything bad or evil. I stood on the side of truth. I followed the path I believe in. Between good and evil, I chose good,” said the medical doctor who on his Twitter states he “would express my thoughts from freedom of fear”.

“If I get punished for that, my conscience is clear. My beliefs will not change.”

The charge, announced on the main evening news bulletins broadcast by state media on Friday and Saturday, can carry a prison term of three years.

Four women and a man who spoke to a visiting CNN news crew in interviews on the streets of the main city of Yangon last week were among those taken into detention in recent days.

A spokesman for CNN said it was aware of reports of detentions following the team’s visit.

“We are pressing the authorities for information on this, and for the safe release of any detainees,” the spokesman said.

Police and a spokesman for the junta did not answer telephone calls from Australian Associated Press (AAP).

Despite the killings and legal threats, protesters have been out every day since elected leader Aung San Suu Kyi was overthrown.

At night, they hold candlelight vigils.

They are rejecting the return to military rule after a decade of tentative steps towards democracy.

Social media has also been a powerful tool for opponents who, despite the cuts to internet, have found ways to post photos showing the reality of life since the coup.

In one photograph posted on Sunday, a bloodied body lay in the middle of the road.

Human rights activists from Milk Tea Alliance described Myanmar as being like a “war zone” and said another body had been discovered the previous day.

Other photographs and videos were published as evidence to support claims the military was behind arson attacks occurring while residents were at home during night-time curfews.

The claims could not be verified.

We guarantee you that there is indeed internet connection cut off in Myanmar with unstable connections. We appeal the global education community to help as much as possible to Myanmar students who are facing physical as well as mental hardships. @nathanlawkc #MilkTeaAlliance https://t.co/ZUuTHgI1lM

The military ruled the former British colony with an iron fist after seizing power in a 1962 coup until it began withdrawing from civilian politics a decade ago, releasing Ms Suu Kyi from years of house arrest and allowing an election that her party swept in 2015.

It has maintained it had to oust Ms Suu Kyi’s government because a November election, again won easily by her party, was rigged.

The election commission has dismissed the military’s claim the voting result was illegitimate.

Many in Myanmar, particularly younger people who have come of age during the past decade of social and economic opening up, cannot accept the return of rule by the generals.

Ms Suu Kyi is in detention facing charges that could bring 14 years in prison.

Myanmar protesters fight back with Easter eggs as celebrities hunted