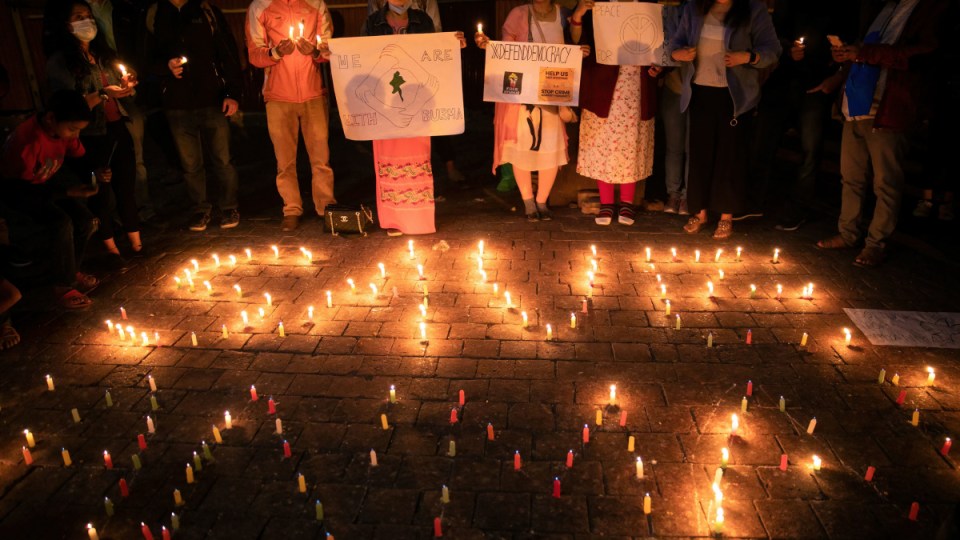 Protesters attend a candlelight vigil for those who died in protests during Myanmar's military coup. Photo: AAP

Myanmar’s junta says it is implementing a unilateral one-month ceasefire but is making an exception for actions that disrupt the government’s security and administrative operations – an apparent reference to the mass movement that has held daily protests against its seizure of power in February.

The announcement came after a flurry of combat with at least two of the ethnic minority guerrilla organisations that maintain a strong presence in their respective areas along the borders.

More than a dozen such groups have for decades sought greater autonomy from the central government, sometimes through armed struggle.

Even in times of peace, relations have been strained and ceasefires fragile.

The movement against the February 1 coup that ousted the elected government of Aung San Suu Kyi focuses on civil disobedience, calling on employees in the public and private sectors to stop work that supports the machinery of governing.

It has been seeking an alliance with the ethnic minority armed groups to boost pressure on the junta.

It would like them to form what they are calling a federal army as a counterweight to the government armed forces.

Largely peaceful demonstrators in the cities and towns of Myanmar have been facing police and soldiers armed with weapons that they have used freely.

At least 536 protesters and bystanders have been killed since the coup, according to Myanmar’s Assistance Association for Political Prisoners, which counts those it can document and says the actual toll is likely much higher.

There was no immediate reaction to the ceasefire announcement from the ethnic minority forces.

Several of the major groups – including the Kachin in the north, the Karen in the east and the Rakhines’ Arakan Army in western Myanmar – have publicly denounced the coup and have said they will defend protesters in the territory they control.

The attackers were reported to have seized weapons and supplies and wounded one police officer.

Meanwhile, an outside visitor was able to see Aung San Suu Kyi for the first time since she was detained when the military staged its coup.

The online news site The Irrawaddy reported she spoke by video link with one of her lawyers, Min Min Soe, on Wednesday.

Suu Kyi has been held on several minor criminal charges and the army said it is investigating more serious allegations of corruption against her.

Her supporters dismiss the legal actions as politically motivated, aimed at discrediting her and preventing her from returning to the political arena, where she is the country’s most popular figure.

The Irrawaddy quoted Min Min Soe saying that Suu Kyi, who is thought to be held somewhere in the capital Naypyitaw, is in good health.

“She even urged us to stay healthy. She was smiling and looked relaxed,” the lawyer said.