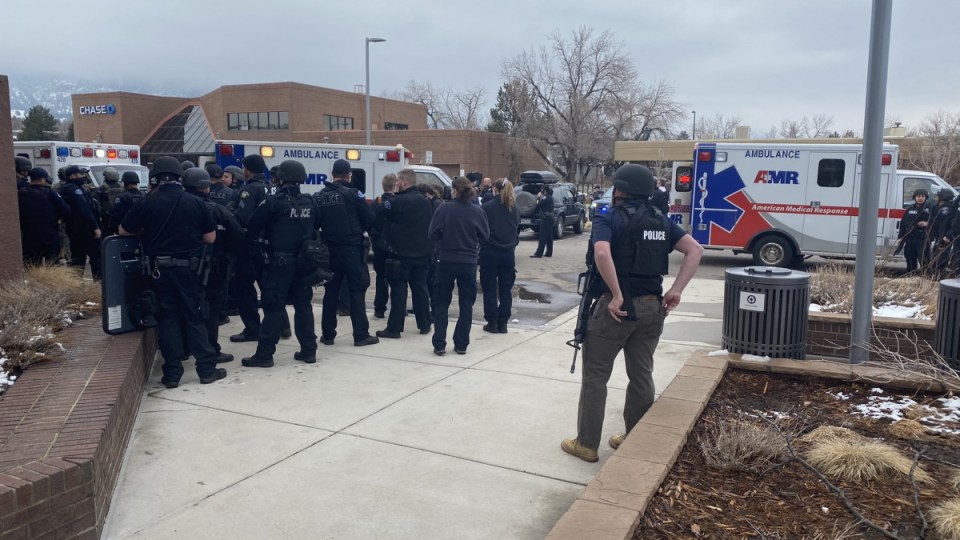 Boulder Police Department officers and emergency services at the scene of a shooting at a King Soopers supermarket in Boulder on Tuesday. Photo: AAP

Several people are dead, including a police officer, after a mass shooting at a supermarket in Colorado.

There are reportedly at least three suspects involved. One man in handcuffs was arrested at the scene and walked to a waiting police vehicle.

Police then closed nearby streets in search of a second shooter and a short time later SWAT teams arrived at what may be a third “suspect’s location”.

One witnesses told local news channel KMGH he heard a gunshot and then several more bangs.

“I immediately sprinted over to her (his companion) and we got out of here and pushed open the emergency door,” said the man.

The pair escaped through the emergency exit.

Boulder Police Department took to social media to warn residents to stay away from specific areas as the gunman was thought to still be at large and was considered “armed and dangerous”.

Shopper Andrew Hummel, who was in the supermarket at the time of the shooting, also reported hearing a loud bang.

He told The Denver Channel people began running towards the back of the shop, and he was able to get out safely.

“I pray that everybody impacted by this is doing all right,” Mr Hummel said.

A friend of Mr Hummel’s, who worked in the shop, remained inside throughout the shooting.

“One of the biggest, like, scary texts he sent, he just said ‘I love you guys. Thank you for everything in case things go bad.’ That was a really hard text, especially me being in this situation,” Mr Hummel said.

“That was something I would never want to hear from any of my friends. Because I knew the seriousness of what was going on. It was horrifying. It was truly horrifying.”