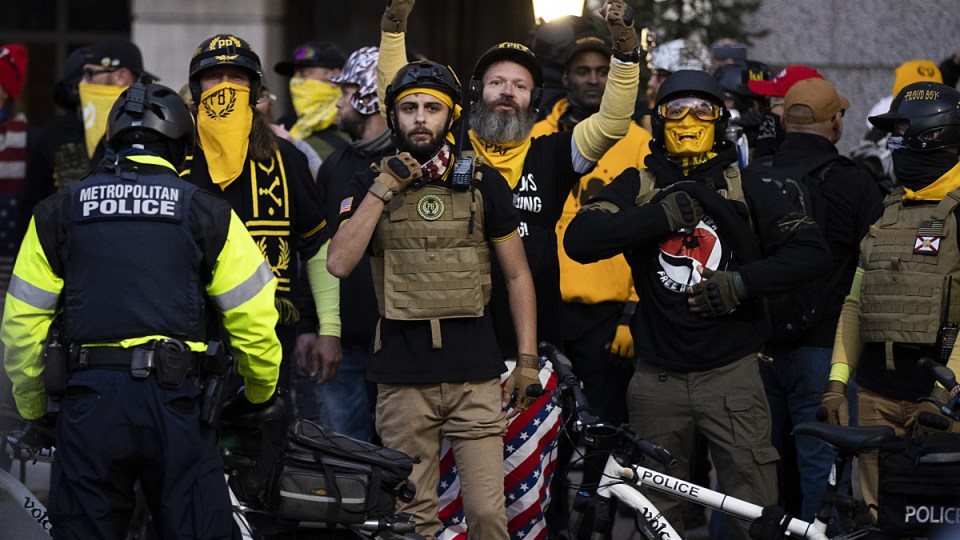 Members of the Proud Boys and Antifa in a stand-off in Washington DC. Photo: Getty

Canada has named the far-right Proud Boys a terrorist entity, saying it poses an active security threat and played a “pivotal role” in January’s deadly attack on the US Capitol.

Although the Proud Boys have never mounted an attack in Canada, Public Safety Minister Bill Blair said on Wednesday (local time) that domestic intelligence forces were increasingly worried about the group.

“There has been a serious and concerning escalation of violence – not just rhetoric but activity and planning – and that is why we have responded as we have,” he said.

Mr Blair’s ministry described the group as “a neo-fascist organisation”.

US authorities have charged several members of the Proud Boys in connection with the January 6 attack in Washington.

Canada’s decision came as a top member of the Proud Boys’ Seattle chapter was arrested and charged for his alleged role in the violent uprising.

Mr Nordean, the self-proclaimed sergeant of arms for the Seattle chapter of the Proud Boys, also faces other charges, including aiding and abetting.

He was to appear in court in Washington state later on Wednesday.

The riot at the US Capitol left five people dead and delayed the US Congress certifying President Joe Biden’s election victory.

Mr Biden’s administration has warned domestic extremism is a growing threat in the US, a sharp departure from how former president Donald Trump regarded extremist groups such as the Proud Boys and Oath Keepers.

In a September pre-election debate with Mr Biden, Mr Trump told the Proud Boys to “stand back and stand by”.

Canada is the first country in the world to put the organisation on a terror list. Ottawa also added 12 other groups – three neo-Nazi groups, eight organisations described as affiliates to al-Qaeda and Islamic State, as well as Hizbul Mujahideen, a Kashmiri group.

Mr Blair said Canadian intelligence agencies had worked for months, and in some cases years, to gather the evidence needed to list the groups.

“Canada will not tolerate ideological, religious or politically motivated acts of violence,” he said.

The Proud Boys’ founder, Gavin McInnes, is a Canadian who lives in the US.

The group began in 2016 as an organisation protesting political correctness and perceived constraints on masculinity in the US and Canada and grew into a group embracing street fighting.

The ruling means the Proud Boys’ assets can be frozen by banks and financial institutions. It is also a crime for Canadians to knowingly deal with assets of a listed entity.

Anyone belonging to the group can be blocked from entering Canada.

Stephanie Carvin, an assistant professor and security expert at Carleton University, said Ottawa was broadening its interpretation of the concept of terrorism, which had once mainly referred to religiously motivated extremism.

“What we’re seeing now is a shift to seeing these groups [like the Proud Boys] as capable of orchestrating the kinds of violence that raise national security concerns,” she said.