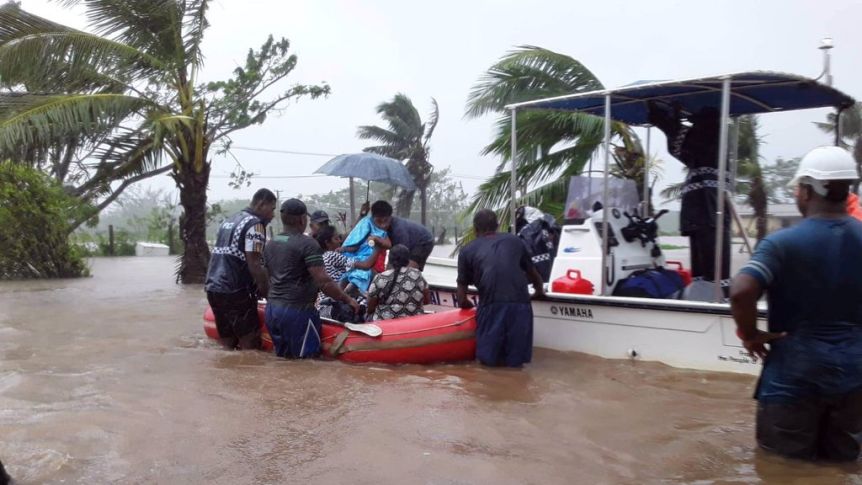 Cyclone Ana is the second cyclone to hit Fiji in two months, after Cyclone Yasa passed over the country in late December. Photo: Twitter/@FijiNDMO

A 49-year-old man has drowned and five people are missing after Cyclone Ana hit Fiji at the weekend.

Disaster authorities said a three-year-old boy was among those missing in floodwaters.

The other four were fishermen who had gone out earlier in the week as the storm developed, according to local media.

While the category two storm is the first cyclone of 2021 to hit the country, the force took many by surprise.

ABC correspondent Lice Movono, who lives in the capital Suva, said the intensity of the cyclone was unexpected.

“It was a huge surprise to all of us, particularly given we are used to category four and five storms … it was unrelenting the rain and the wind,” she told ABC’s Pacific Beat.

“It was very long … it stayed all day and it brought masses of rain that have caused flooding.”

Before the storm hit, the Fiji Prime Minister Frank Bainimarama issued a pointed warning on Facebook.

“No-one should take this storm lightly,” he said.

“Prepare now – as we’ve seen before, it’s the storms we don’t expect that can strike the hardest.”

The storm cut through the northern and eastern parts of Viti Levu with winds of up to 140km/h.

Ana is the second cyclone to hit Fiji in just two months, after Cyclone Yasa passed over the country in late December.

Unlike Yasa, Cyclone Ana passed directly over Suva, concentrating the destruction on the country’s most heavily populated corridor.

Early reports suggested the storm had a major impact on informal settlements around Suva.

“This is where informal settlements are, and those people cannot prepare,” Ms Movono said.

“We are talking about potentially thousands of people who won’t have a roof over their heads.”

Cyclone Ana is tracking away from Fiji, but has been upgraded to category three system.

Meanwhile, Fiji weather authorities have named a second cyclone, Bina, which is currently a category one storm and fast moving.

It is not expected to cause major damage.