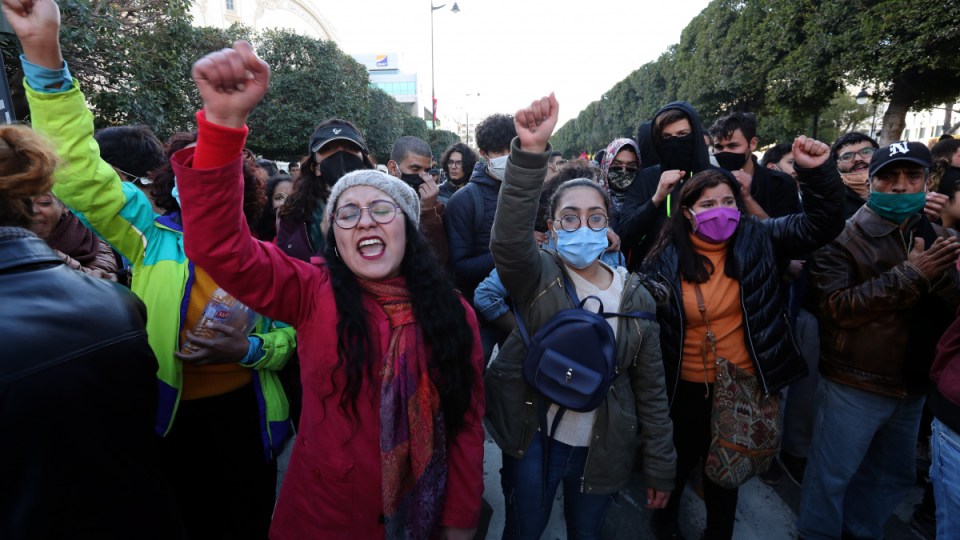 A wave of nocturnal demonstrations has rocked the country since January 16. Photo: AAP

Protesters have rallied in Tunisia’s capital after several nights of street violence, reviving the chant that rang a decade ago in a revolution that brought in democracy: “the people want the fall of the regime”.

Daytime protests in Tunis and some other cities demanding jobs, dignity and the release of detainees have followed clashes over recent nights between security forces and youths as COVID-19 restrictions add to wider economic malaise.

“The whole system must go… We will return to the streets and we will regain our rights and our dignity that a corrupt elite seized after the revolution,” Maher Abid, an unemployed protester, said.

However, in cities across the country youths have thrown stones and petrol bombs, burnt tyres and looted shops while police have deployed tear gas and batons, arresting hundreds.

Up to 250 people gathered in central Tunis’ Bourguiba Avenue on Tuesday while other demonstrations took place in towns near Sidi Bouzid, where the 2011 revolution began.

The toppling then of Tunisia’s long-serving ruler inspired similar uprisings across the region dubbed the “Arab Spring”.

Protesters in all three rallies chanted “the people want the fall of the regime”, as well as demands for jobs.

Tunisia was suffering economically even before the COVID-19 crisis, with high unemployment and declining state services.

Earlier on Tuesday, the powerful labour union and other rights groups voiced support for peaceful protests against “policies of marginalisation, impoverishment and starvation,” accusing the state of squandering the revolution’s hopes.