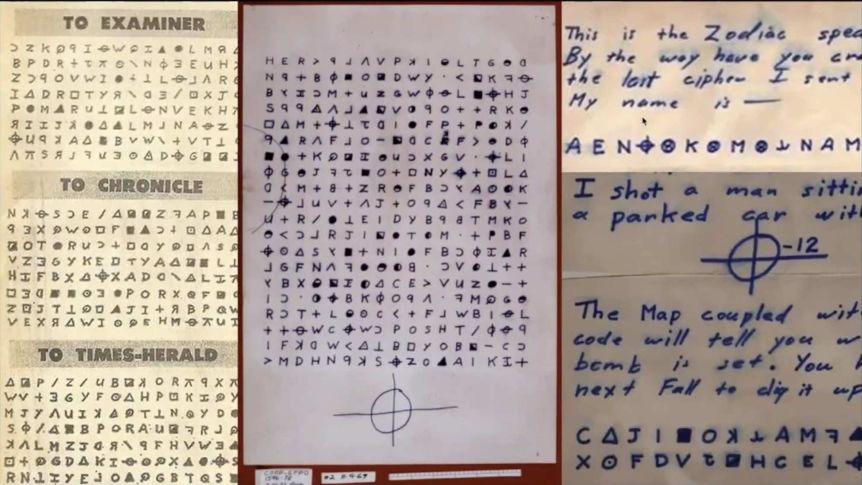 The Zodiac killer sent handwritten codes to local newspapers in the San Francisco Bay Area in the 1960s and 70s. Photo: Supplied

Melbourne mathematician Samuel Blake and two fellow cryptologists have been officially recognised by the United States Federal Bureau of Investigation for solving a 50-year-old cryptic message written by an as yet unnamed serial killer, known only as Zodiac.

Dr Blake worked on decoding the message known as the “340 cipher” with two other cryptologists and a University of Melbourne supercomputer called Spartan to eventually reveal its content.

The cipher bears a distinctive circle with a cross through the middle and was sent to the San Francisco Chronicle on November 8, 1969 by a man who called himself “Zodiac”.

The correspondent killer sent letters to newspapers over several years up until 1974, including proof he was responsible for the deaths of at least five people in the San Francisco Bay Area.

The official cracking of the 340-character cipher provides insight into the killer’s thoughts and actions but does not reveal a name, as promised in separate letters sent to newspapers.

Dr Blake said he had been working on finding a solution to the 340 cipher, considered one of the holy grails of cryptography, since contacting Zodiac cryptologist David Oranchak early in 2020.

Mr Oranchak hosts a website dedicated to cracking the Zodiac ciphers and has posted several YouTube videos detailing the work he has done over 15 years trying to solve them.

“During the year we tested, by trial and error, around 650,000 different reading directions through the cipher. This search turned up — more or less — nothing,” he said.

“However, one of these searches uncovered a surprising combination of words: GAS CHAMBER. That such a macabre phase should pop up in a sea of noise warranted further attention.

“From this fragment, David, Jarl van Eycke and I reworked the key and corrected an error Zodiac made in his diagonal enumeration of the second vertical segment of the cipher. Dr Blake is a visiting fellow at the University of Melbourne and described how the university’s supercomputer, Spartan, solved the cipher after processing 650,000 other possible solutions.

Mr Oranchak sent the proposed solution to the Cryptanalysis and Racketeering Records Unit of the FBI and within a day they officially approved the solution.

In a statement released on Friday, US time, the FBI confirmed that the cipher attributed to the Zodiac Killer was recently solved by “private citizens.”

“After 50 years of active research, this cipher has finally been solved. We now understand why it resisted attacks for so long,” Dr Blake wrote on social media.

“The reading direction through the cipher was so obscure, that the only way it could be found was with a massive search through many candidates using sophisticated software which can efficiently solve homophonic substitution ciphers.

Dr Blake and his colleagues have dedicated their work to the murder victims and their families.

The Melbourne mathematician now hopes the solution he and his colleagues have revealed will help crack the two remaining unsolved short ciphers: one with 13 symbols and the other with 32.

In correspondence, the killer hinted that these ciphers contain his name.

“Perhaps my lack of knowledge of the case helped as it wasn’t a distraction.

“It would be fantastic if this helps the investigation in some way, now it’s over to the experts in interpreting the meaning of his message.”