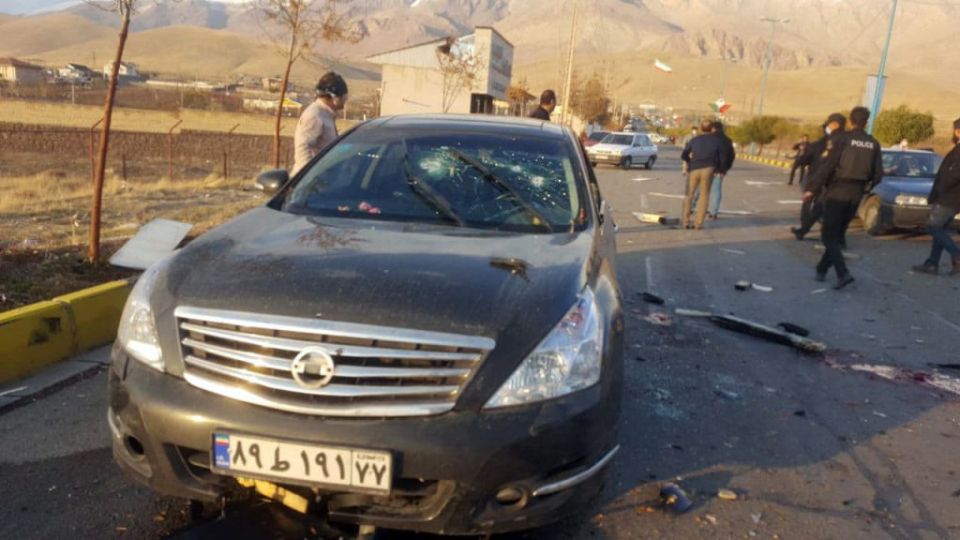 Iran says it will avenge the death of its top nuclear scientist who has been assassinated in an apparent car ambush which the rogue nation is blaming on Israel.

Images of the aftermath show bullet holes in a windscreen plus blood and broken glass scattered on a road in Absard town, a village east of the capital Tehran frequented by Iranian elite.

“After a clash between the terrorists and his bodyguards, Mr Fakhrizadeh was severely injured and rushed to hospital,” Iran’s Defence Ministry said in a statement .

“Unfortunately, the medical team did not succeed in reviving [Fakhrizadeh], and a few minutes ago, this manager and scientist achieved the high status of martyrdom after years of effort and struggle.”

Iranian state television said an old truck with explosives hidden under a load of wood blew up near the sedan carrying Fakhrizadeh.

He died at a hospital after doctors and paramedics couldn’t revive him and his bodyguards were wounded.

Fakhrizadeh is thought by the West to have masterminded a covert nuclear weapons program – the so-called AMAD plan – shelved in 2003.

There has since been concern about the amount of uranium being enriched by Iran which the West believes could be a cover for an ongoing weapons program.

Iran’s leaders reacted quickly to the attack, pointing the finger at Israel and vowing to strike back, although no-one has claimed responsibility.

“In the last days of the political life of their … ally (US President Donald Trump), the Zionists (Israel) seek to intensify pressure on Iran and create a full-blown war,” he tweeted.

“We will strike as thunder at the killers of this oppressed martyr and will make them regret their action.”

Iran’s foreign minister also laid the blame firmly with Israel which has previously singled out Fakhrizadeh as a name to remember.

Fakhrizadeh has the rare distinction of being the only Iranian scientist named in the International Atomic Energy Agency’s 2015 “final assessment” about Iran’s nuclear program and whether it was aimed at developing a nuclear bomb.

Israel has described the AMAD Plan as Iran’s secret nuclear weapons program and says it seized a large chunk of an Iranian nuclear “archive” detailing its work.

Mr Netanyahu said that after AMAD was shut down Fakhrizadeh continued working at an organisation within Iran’s Defence Ministry on “special projects”.

The IAEA’s report said that he oversaw activities “in support of a possible military dimension to (Iran’s) nuclear program” within the so-called AMAD Plan.