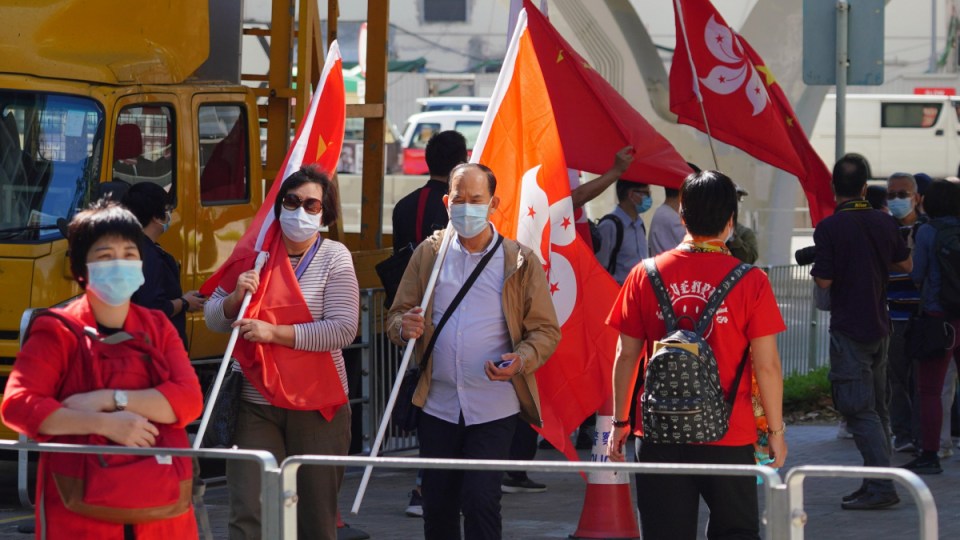 Por-Beijing Hong Kong residents gather outside the former colony's parliament to show their support for the decision. Photo: Getty

Britain says China has broken its main bilateral treaty on Hong Kong by imposing new rules to disqualify elected legislators in the former British colony, cautioning that it will consider sanctions as part of its response.

The British flag was lowered over Hong Kong when the colony was handed back to China in 1997 after more than 150 years of British rule – imposed after Britain defeated China in the First Opium War.

“China has once again broken its promises and undermined Hong Kong’s high degree of autonomy.”

“We will continue to consider designations under our Magnitsky-style sanctions regime,” said Mr Adams, Britain’s minister for Asia.

Asked by MPs if Britain would sanction Hong Kong chief executive Carrie Lam, Mr Adams said it would not be helpful to speculate on names at this stage.

China’s embassy did not immediately respond to a request for comment.

On Wednesday, Hong Kong’s pro-democracy opposition MPs said they would resign in protest at the dismissal of four of their colleagues from the city assembly after Beijing gave local authorities new powers to further curb dissent.

The Chinese parliament earlier adopted a resolution allowing the city’s executive to expel MPs deemed to be advocating Hong Kong independence, colluding with foreign forces or threatening national security, without having to go through the courts.