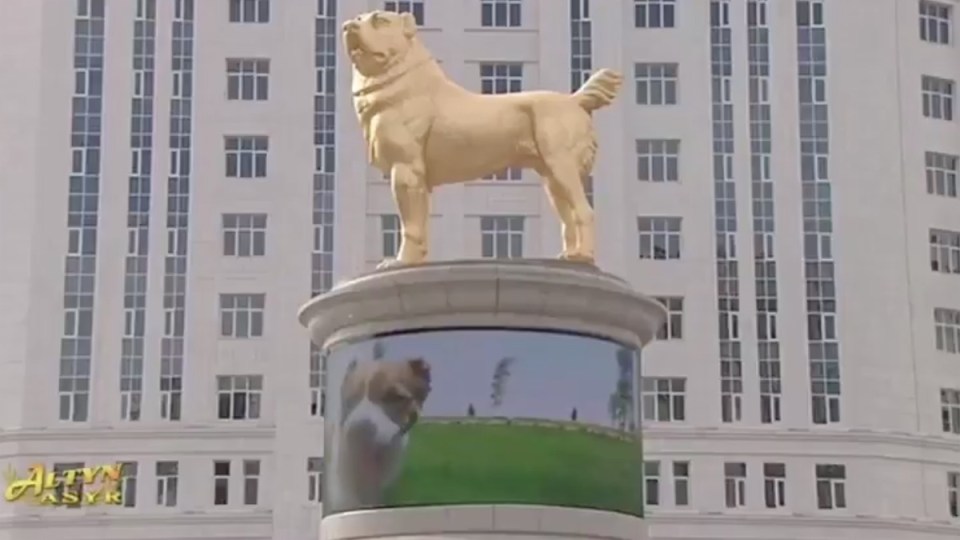 The long-time autocratic leader of Turkmenistan is a dog person, with a great love for the nation’s local breed.

President Kurbanguly Berdymukhamedov feels so strongly about the alabai, or Central Asian shepherd dog, that he commissioned a huge gilded statue of one to sit atop a busy traffic circle in the capital city, Ashgabat.

The statue, with a screen showing Turkmenistan’s beloved alabai dogs in action wrapped around the pedestal, joins another on a nearby major junction, also coated in gold, of Mr Berdymukhamedov seated on a horse.

Dogs and horses are sources of pride in the isolated desert country, where they are widely used by the many traditional herders among the population of six million.

The large, stocky alabai is known as “wolf crusher” for its skills in guarding sheep and goats. It is also used to guard homes and for dog fights, a popular entertainment in Turkmenistan.

Mr Berdymukhamedov has run the tightly-controlled former Soviet republic, which largely depends on revenues from natural gas reserves,  since 2007 and is unofficially known as “Arkadag” – or protector.

He has been labelled by some as eccentric, once pulling off a rather odd stunt to prove to the world that he was in fact, still alive.

A weeks-long disappearance in 2019 sparked rumours that Mr Berdymukhamedov had died – not dissimilar to suspicions about the whereabouts of North Korean leader Kim Jong Un earlier this year.

Mr Berdymukhamedov was apparently less than pleased about the speculation that he could be dead, and took drastic steps to prove otherwise.

The President of Turkmenistan appeared on state television, driving a rally car around a flaming gas crater known as “Hell’s Gate”.

The video was soon picked up by media outlets around the world, putting that piece of gossip at least, to rest.

Mr Berdymukhamedov also has a creative streak. He once made a global impression after releasing a rap video with his grandson about the “amazing” country of Turkmenistan.

His creativity is not limited to music though, as his love for the alabai once inspired him to write a book about them.

He has also written a poem about the breed, which he says are national heritage.