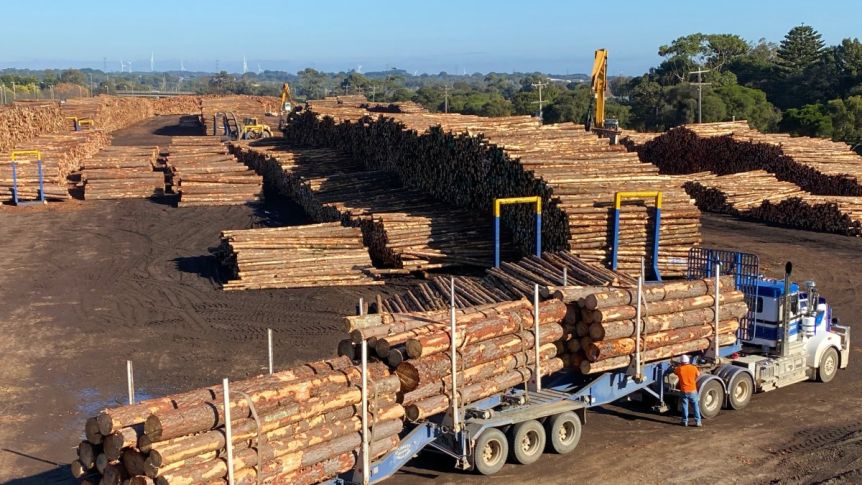 Some exporters are now holding off sending shipments to China for fear they may be blocked. Photo: SA Timber Processors Association

China has indefinitely suspended imports of all Victorian timber logs, less than a week after an unofficial ban on Australian exports came into effect.

It follows China’s decision to block a shipment of Queensland timber last month, sending exporters into limbo amid fears more exports will be blocked.

Chinese customs officials notified the Department of Agriculture, Water and Environment late yesterday of the ban, which is effective immediately, after 12 shipments from Victoria this year contained a pest known as bark beetle.

Agriculture Minister David Littleproud said the department was working with industry on an “enhanced treatment and inspection response”, and would write to China’s customs officials in coming days.

“There is concern around the effectiveness of fumigation treatments on shipments of bushfire-affected logs for export” Mr Littleproud said.

“If bark beetle is present it is a legitimate reason to suspend trade, and we want to make sure we can address any quarantine issues as quickly as possible,” Ms Symes said.

“We don’t have any evidence either way at this time.”

The Victorian government said it would “back the federal government to lead effective talks with Chinese authorities”.

The annual trade for whole logs from Victoria to China is valued at $260 million.

At least two shipments, which had been expected to load at Portland in western Victoria this week, have now been cancelled, and there are concerns for shipments at sea already en route to China.

It is possible they could now be rerouted to markets in Vietnam or Japan.

The ABC understands almost 30 consignments from Australia to China in the months up to July, including some with burnt logs from the summer’s bushfires, had a bug detected in them.

Australian exporters had been warned by Chinese importers that Australian goods including rock lobster, wine, timber and coal would be blocked at Chinese Customs.

Two Australian grain exporters were recently suspended from trading barley to China, and five Australian abattoirs have had exports blocked by China due to quarantine and labelling issues.

The Australian Forest Products Association said it was working with government officials in China and Australia to address the issue.

An investigation into the suspensions by Australian authorities is expected to take 30 days.

Two Australian grain exporters were recently suspended from trading barley to China, and five Australian abattoirs have had exports blocked by China due to quarantine and labelling issues.

Brad Coates, from the Construction, Forestry, Maritime, Mining, and Energy Union, blamed the timber suspensions on political tensions between Australia and China.

“The reasons that China are giving are pretty much in line with the previous behaviour for putting trade pressure on countries that they were having some issues with, and Australia is one of those at the moment,” Mr Coates said.

“I think this is as a result of some pretty poor diplomatic efforts from the Australian government.”

Mr Coates said the length of the ban would determine its impact.

“If it continues on through Christmas and into next year, there’ll be certainly significant job losses and stand-downs,” he said.

Victorian logging contractor Brad Meyer said the suspension would have widespread impact “because there is a lot of stuff being exported to China and a lot of the [Australian] timber industry relies on it … it’s a loss of income”.

While there are no bans on timber exports out of Western Australia, timber company Varied has pre-emptively stopped exporting to China for fear it would be rejected at receival points.

Varied said the business currently has $3-4 million dollars’ worth of stock being held at Bunbury Port in WA’s south-west and would not send product until there was a clear directive that shipments would be accepted.

“We were expected to ship about 20,000 tonnes around about mid-December so that’s now on hold,” managing director Gary Addison said.

“I don’t think anyone in Australia right now is exporting logs, they’re all sitting back waiting to see what is the position going to be moving forward.”

Meanwhile, Australia’s winemakers are awaiting more information about how exports are clearing customs.

Tony Battaglene from Australian Grape and Wine said winemakers were nervous about losing access to their most valuable market.

“We know product is going into ports and we know it’s getting increased testing, and increased scrutiny but we don’t know if it’s clearing,” Mr Battaglene said.

He said export approvals for Australian wine to China were well down on previous years.