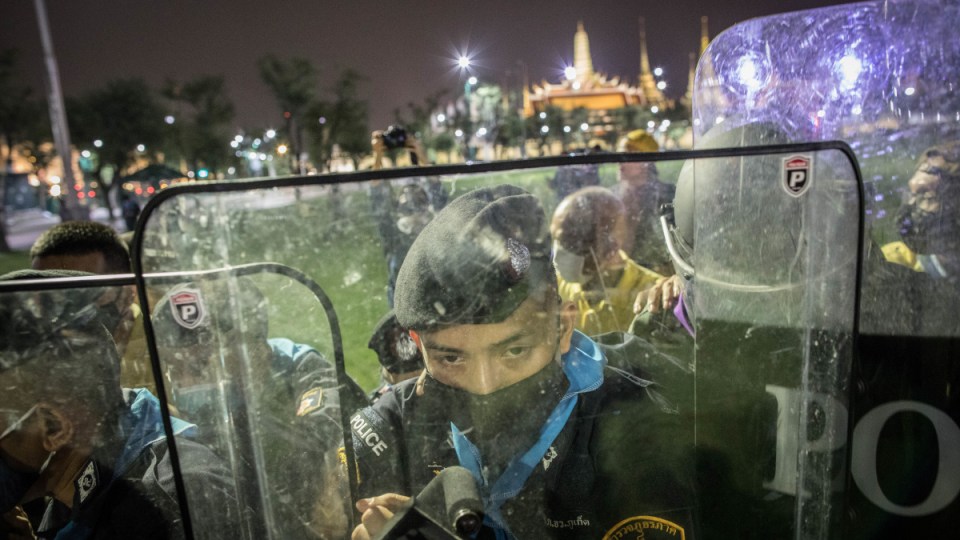 A riot policeman seen behind his shield in front of the Grand Palace during an anti-government demonstration in Bangkok. Photo: AAP

Despite a burst of water cannon and a police blockade, thousands of Thai protesters have marched to the Grand Palace in Bangkok to demand curbs to King Maha Vajiralongkorn’s powers and the removal of the government.

Police used the water cannon for the second time in months of largely peaceful protests to demand greater democracy and the departure of Prime Minister Prayuth Chan-ocha, a former junta leader.

“When the king truly cherishes democracy, all people will find happiness,” the protesters said in a statement read a few dozen metres from the walls of the palace, where they were stopped by police.

“When you hear all the flattering praise from the people, you must also hear fearless criticisms and suggestions all the same,” said the statement, signed “with power of equal human dignity” by “people”.

The Royal Palace was not available for comment. It has not commented since the start of the protests.

But the king said a week ago that the protesters were still loved and that Thailand was a land of compromise, as he greeted thousands of well-wishers near the very spot that the demonstrators reached on Sunday.

Reuters journalists estimated more than 10,000 protesters marched from Democracy Monument in central Bangkok, while police put the number at 7000.

Protests since July have increasingly called for reforms to the powerful monarchy, breaking a long-standing taboo against criticising the institution, which can be punished by up to 15 years in prison.

The protesters say the monarchy has helped enable decades of military domination of Thailand, most recently by approving the premiership of Prayuth, who seized power in a 2014 coup and kept it after disputed elections last year.

Monarchists see the student-led protesters’ demands for reforms to the institution as a way of getting rid it of entirely, although protesters deny that is their goal.