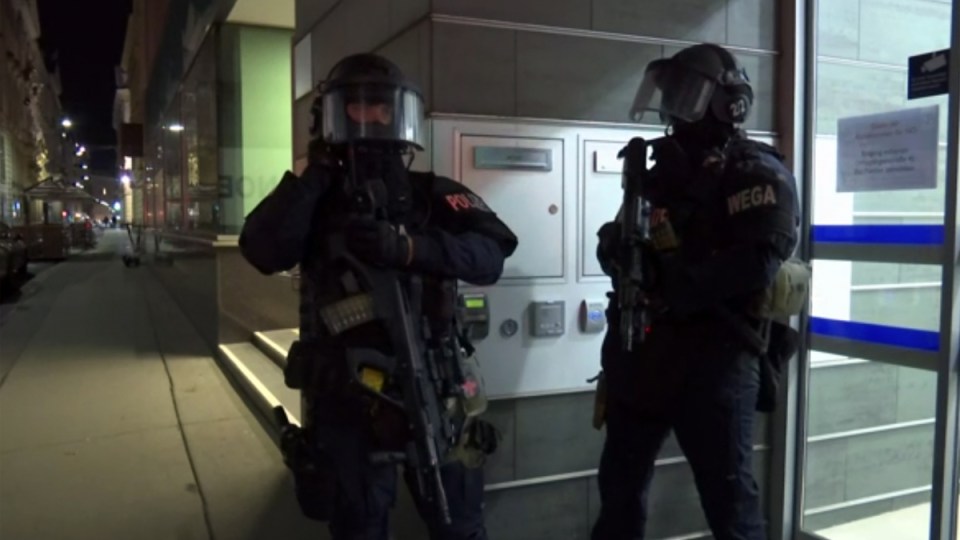 Police at the scene after gunshots were heard in Vienna. Photo: AAP

A massive manhunt is underway in the Austrian capital of Vienna after several gunmen, one reportedly wearing a suicide vest, opened fire on the streets of the city.

Up to 15 people have reportedly been injured, several critically and in hospital, after alleged terrorists, described as “heavily armed and dangerous” randomly shot people in an historic part of the city, known as the 1st District near the Danube River.

At least six crime scenes have been established as several special forces units continue searching for the presumed terrorists.

Two people are dead, including one of the gunmen who was shot by police.

Stephanie Liechtenstein, a freelance journalist based in Vienna, said the country’s public television network reported “one dead assassin was, indeed, wearing some sort of a suicide vest or explosive belt”.

“They are still at the scene trying to control the situation. It is not clear at this moment how many other perpetrators are still at large, which is why the public is asked to stay indoors,” she told the ABC.

The “repulsive terror attack” occurred about 8pm on Monday local time on a warm night, where streets and restaurants were filled with people enjoying a night out before the city’s second COVID-19 lockdown.

Austrian Chancellor Sebastian Kurz said the Army would protect sites in the capital so police could focus on anti-terror operations.

“We are currently experiencing difficult hours in our republic,” Mr Kurz wrote on Twitter.

“I would like to thank all the emergency forces who are risking their lives for our safety, especially today.

“Our police will take decisive action against the perpetrators of this repulsive terrorist attack.”

“At the moment I can confirm we believe this is an apparent terror attack,” he said.

“We believe there are several perpetrators. Unfortunately there are also several injured, probably also dead.”

Newspaper Kronen Zeitung reported that a synagogue had been attacked, however other local media claim the main synagogue in the vicinity were closed at the time of the shooting.

The head of the Jewish community in Vienna said the shooting took place in the street where the city’s Seitenstettengasse synagogue was located, but it was not clear whether the house of worship had been targeted.

Jewish community leader Oskar Deutsch said on Twitter it was not clear whether the Vienna synagogue and adjoining offices had been the target of an attack, and said they were closed at the time.

“We are living in the compound of the synagogue. Upon hearing shots we looked down from the windows and saw the gunmen shooting at the guests of the various bars and pubs,” Rabbi Schlomo Hofmeister told London’s LBC radio.

“The gunmen were running around and shooting at least 100 rounds or even more in front of our building.”

Videos began to circulate on social media of a gunman running down a cobblestone street shooting and shouting.

Vienna police urged people not to share videos and photos via social media.

“This jeopardizes police forces as well as the civilian population,” they said on Twitter.

In 1981, two people were killed and 18 people injured during an attack by two Palestinians at the same synagogue.

In recent years Austria has been spared the sort of large-scale attacks seen in Paris, Berlin and London.

In August, authorities arrested a Syrian refugee suspected of trying to attack a Jewish community leader in the city of Graz.

Madonna King: If Peter Dutton has a soft side, now is the time to show it
Darren Chester to challenge Barnaby Joyce, Sussan Ley puts hand up for Liberal deputy