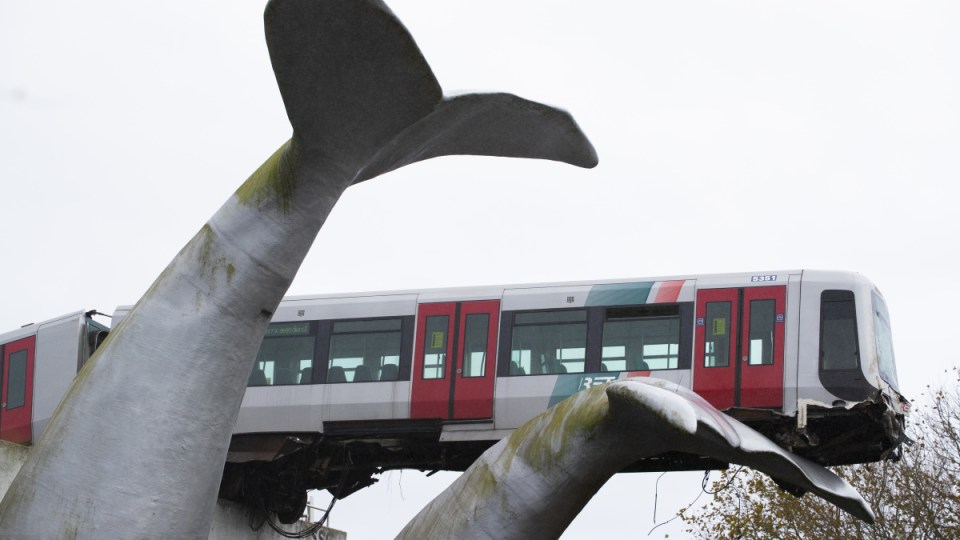 The whale's tail of a sculpture stopped a train plunging 10m off an elevated track near Rotterdam in the Netherlands. Photo: AAP

The driver of an elevated train that ran past the end of its tracks has come out unscathed, thanks to a statue of a whale’s tail.

Instead of plunging 10 metres to the ground from a pier, the train came to rest delicately on top of the sculpture, which is coincidentally called Saved by a Whale’s Tale.

It had not been intended to actually save the train, which crashed through stop barriers at the end of the station near the Dutch port city of Rotterdam.

The conductor emerged shocked but unharmed and there were no passengers on board.

“Of course it does look rather poetic,” artist and architect Maarten Struijs was quoted as saying by the Algemeen Dagblad newspaper.

“But it’s really lucky that the tail can bear the weight of the train.”

He said he was “surprised it’s so strong”.

“If plastic has been standing for 20 years, you don’t expect it to hold a metro carriage.”

The suspended tram car could be seen by passers-by in the streets below.

About 50 people were at the scene even after local authorities urged the public to stay away due to coronavirus restrictions.

Engineers were studying how the tram car and several others derailed behind it could be safely removed, saying “it’s tricky”.

“A team of experts is investigating how we can make it safe and get it down,” said Carly Gorter, a spokeswoman for the local security authority.

Amid calls on social media to leave it as a permanent addition to the artwork, Rotterdam Metro and local officials said it would not be safe.