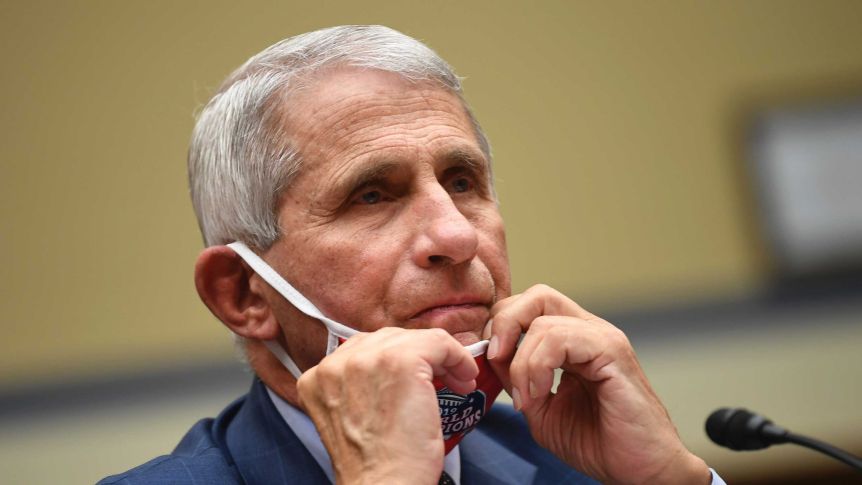 Dr Anthony Fauci says the US is facing a critical moment in it's virus fight. Photo: AP

The White House coronavirus task force is warning of a persistent and broad spread of COVID-19 in the western half of the United States and urged aggressive mitigation measures to curb infections.

The area includes a number of battleground states that will play an important role in next week’s US presidential election as Republican President Donald Trump seeks a second term and victory over Democratic challenger Joe Biden.

“We are on a very difficult trajectory. We’re going in the wrong direction,” Dr Anthony Fauci, task force member and director of the National Institute of Allergy and Infectious Diseases, said.

Dr Fauci noted that coronavirus cases are rising in 47 states and patients are overwhelming hospitals across the country, while data from the Johns Hopkins University revealed over 20 states are currently seeing record highs in confirmed cases.

“If things do not change, if they continue on the course we’re on, there’s going to be a whole lot of pain in this country with regard to additional cases and hospitalisations, and deaths,” he told CNBC.

“This is going to get worse because we’re going more into a colder season, as we get through the fall and into the winter with the holiday season.”

Dr Fauci said the numbers are “stunning” and the US needs a mask mandate to combat the coronavirus.

“If we don’t get one, then I would hope that the governors and the mayors do it locally, if it’s not done nationally,” he said.

He also said he hasn’t spoken with Mr Trump “in quite a while about the situation with regard to the outbreak”.

On Wednesday Dr Fauci praised Victoria’s attitude towards mask-wearing, saying Australia and New Zealand were among countries that he believed had done “quite well” in tackling the pandemic.

“I would like to say the same for the United States, but the numbers speak for themselves,” he said.

The White House coronavirus task force has warned states in the middle and west of the country that aggressive mitigation measures will be necessary, according to weekly state reports obtained by CNN.

“We continue to see unrelenting, broad community spread in the Midwest, Upper Midwest and West. This will require aggressive mitigation to control both the silent, asymptomatic spread and symptomatic spread,” one state’s report said.

Mr Biden and his fellow Democrats in Congress have excoriated Mr Trump for his handling of the pandemic, which has killed nearly 227,000 people in the United States.

Mr Trump pushed to reopen the US economy, sometimes against the advice of his own government health experts.

White House Chief of Staff Mark Meadows defended the administration’s response and stressed that therapeutics and vaccines were on the way.

“We know what doesn’t work. We know that long-term lockdowns and shutting down our economy and making sure that everybody just stays inside their house doesn’t work,” Mr Meadows said on CBS.

There are no calls for a nationwide lockdown at this point, but health officials are urging a renewed push to get Americans to redouble mitigation efforts.

Mr Meadows did not say the White House would engage in any new initiatives on that front.

Mr Trump has repeatedly downplayed the virus, claiming for weeks that the country is “rounding the turn” as cases climb.

The task force reports said the cooler weather is a major factor in the increase in cases as friends and families move gatherings indoors.

US hospitalisations are soaring, a metric not affected by the amount of testing done.

Thirteen states, mainly in the Midwest and West, reported a record number of hospitalised COVID-19 patients on Wednesday (local time), according to a Reuters analysis.

The state of Wisconsin, a hotly contested battleground, is one of 36 states where coronavirus hospitalisations are rising by at least 10 per cent compared with the previous week.

The state of Michigan, another election battleground state, logged a one-day record of over 3,500 new cases.

The state of Illinois reported over 6,000 new cases on Wednesday (local time), the biggest increase of any state in the country and topping the 5,700 new cases in the much more populous state of Texas and 4,200 new cases in California.

And in the state of Florida, a key battleground state in the US election where both Mr Biden and Mr Trump are campaigning on Thursday (local time) has recorded 27,893 cases this week to date which is significantly down from the record high of 80,236 weekly cases in recorded in mid-July.

Dr Anthony Fauci, the US’ top infectious disease expert, warns COVID-19 there is getting a lot worse