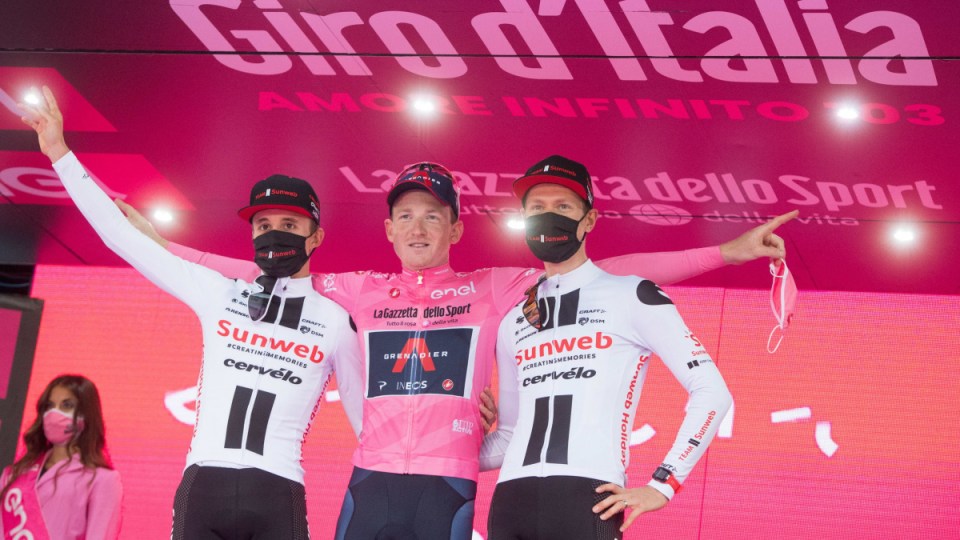 On Sunday, the 24-year-old from Perth just missed out in his wholly unexpected attempt to win one of the great prizes in cycling, losing his leader’s pink jersey on the very final time stage in Milan.

In the end, just 39 seconds separated the man from Perth from the most unlikely of victories as his English friend Tao Geoghegan Hart ended up prevailing after the wonderful three-week battle.

It meant Hindley just failed in his bid to become the first Australian winner of the event and only the second after Cadel Evans, winner at the 2011 Tour de France, to secure victory in one of cycling’s three grand tours – Le Tour, the Giro and the the Vuelta a Espana.

Yet by achieving the best-ever result by an Australian in the Giro – Evans finished third in the 2013 edition – he has quite transformed his standing in the sport over the past week.

As he cycled into sight of Milan’s famous cathedral, Britain’s former Tour de France champion Bradley Wiggins, commentating on Eurosport, declared: “We’re going to be talking about this man a lot for the next 10 years. He’s been fantastic.”

Cycling has long been aware of Hindley’s talent, especially after the youngster who learned his trade at Midland Cycling Club in Western Australia won in China’s Tour of Fuzhou in 2017 and his home Herald Sun Tour in February.

Yet the man who finished only 21st in the national road race championship in January was only at the Giro as a domestique at the service of his team leader, Dutchman Wilco Kelderman.

Instead, the servant was to become the master over the past week.

After the time trial eight days ago when he could only come home in 34th place, Hindley, who had never previously finished even in the top-30 in his previous grand tours, had dropped back to 10th place overall.

Yet the following day he had done such a sterling job in the mountains to pull Kelderman home behind stage winner Hart that he had moved back up into third.

What followed over the week was astonishing. Hindley simply grew in stature, looking far stronger in the mountains than Kelderman to the point that Sunweb were left in a dilemma whether to throw their backing behind the Australian.

In the end, Hindley proved his dominance as Kelderman cracked on the penultimate mountain stage, leaving the race to be decided by Sunday’s time trial which both the Australian and Hart, incredibly, started while locked on exactly the same time.

What was also striking about Hindley throughout the amazing final week’s action was how he was prepared to play the role of dedicated team man to the point where it might have affected his own chances of winning.

In Thursday’s key stage on the fearsome slopes of the Stelvio, Kelderman was suffering so Hindley, up ahead, was ordered by his team not to put more time into the Dutchman and was asked to simply follow Geoghegan Hart to the line at Laghi di Cancano.

“I don’t have any regrets. If I wanted to attack, I would have attacked,” Hindley said of that stage, while still happy to “do everything” to help Kelderman win overall.

“It was part of the plan. I followed the team plan. We won the stage that day and (Kelderman) took the pink. The way it’s unfolded is the way it is, and I can’t change that. I regret nothing.”

Giro d’Italia: Cycling champ Jai Hindley misses out – but a star is born