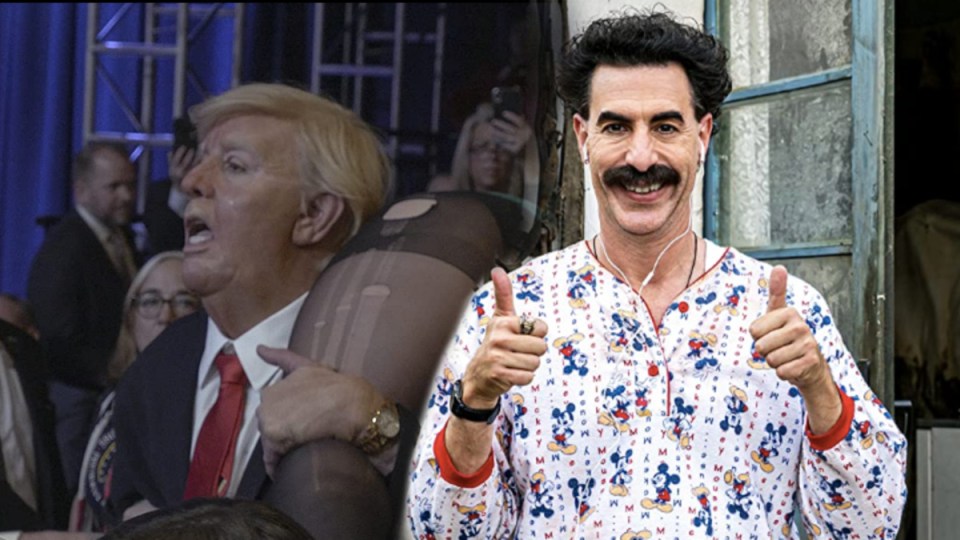 And the timing is no accident.

In the secretly filmed follow-up to the original, released in 2006, Baron Cohen’s character Borat – a clueless journalist from Kazakhstan – is sent on a mission to infiltrate US President Donald Trump’s inner circle.

In typical Borat style, no prank is considered a step too far.

Sensitive subjects such as abortion, incest, the Ku Klux Klan, feminism and right-wing extremism all feature in the cringeworthy mockumentary.

Celebrities such as actor Seth Rogen have lauded the film, but Mr Trump says he wants nothing to do with it.

I’ve seen #Borat2 around six times over the last few months, and I can’t wait to watch it a seventh. It’s crazy and wonderful and couldn’t be more timely. It also has a few of the funniest scenes I’ve ever seen in a movie. I’m excited for you to see it.

Speaking to journalists aboard Air Force One on Friday – the same day the sequel began streaming on Amazon Prime – Mr Trump labelled Baron Cohen a “phoney” and a “creep”.

“I don’t find him funny,” the President said.

So who was in Borat’s firing line?

The scene that got everyone talking features Mr Trump’s personal lawyer and adviser, Rudy Giuliani.

In the scene, Mr Giuliani, 76, is being interviewed by Borat’s teenage daughter, Tutar (played by Bulgarian actor Maria Bakalova), who is posing as a journalist.

After the interview, she invites him for a drink in her hotel bedroom.

As he sits down on the bed, he says, “You can give me your phone number and your address”, while patting her on the back.

The footage, accompanied by suspenseful music, shows Mr Giuliani lying on the bed, tucking his shirt with his hand down his trousers after Tutar helps him remove his recording equipment.

But before anything else can happen, Borat bursts into the room wearing a mankini and yells, “She’s 15 – she’s too old for you!”.

A humiliated Mr Giuliani called the scene “a hit job”, and said it was deliberately edited to make him look like he was behaving inappropriately.

But Baron Cohen argued it was “pretty clear” what Mr Giuliani was doing, and urged people to watch the film to make up their own minds.

“I would say that if the President’s lawyer found what he did there appropriate behaviour then heaven knows what he’s done with other female journalists in hotel rooms,” he said in an interview with Good Morning America.

In another scene of the film, Borat is shown interrupting a speech by Vice President Mike Pence at a political conference in February.

But that’s not even the most shocking part.

To get into the conference, Borat dresses as a Ku Klux Klansman and introduces himself as Mr Trump’s senior adviser Stephen Miller to attendees in the lobby.

After seeking refuge in a nearby bathroom, Borat then pulls on a Donald Trump costume.

Carrying Tutar over his shoulder, Borat – dressed as Mr Trump – rushes into the function room while Mr Pence is speaking, yelling “I brought the girl for you!” before security remove him.

The incident even made headlines at the time.

Notably, the footage lingers on a part of Mr Pence’s speech in which he claims the White House had the coronavirus outbreak under control.

If only that were true.

As the film comes to a close, Borat realises his mission to crack into the White House elite was really a revenge plot designed by the Kazakh authorities to spread COVID-19 around the world.

In a series of flashbacks, Borat remembers being injected with the coronavirus before making a pit stop at a wet market in Wuhan, China, and docking briefly in Sydney where he met – and coughed all over – Tom Hanks.

Hanks was one of the first high-profile celebrities to contract the coronavirus back in March. He fell ill while shooting an Elvis Presley biopic in Australia.