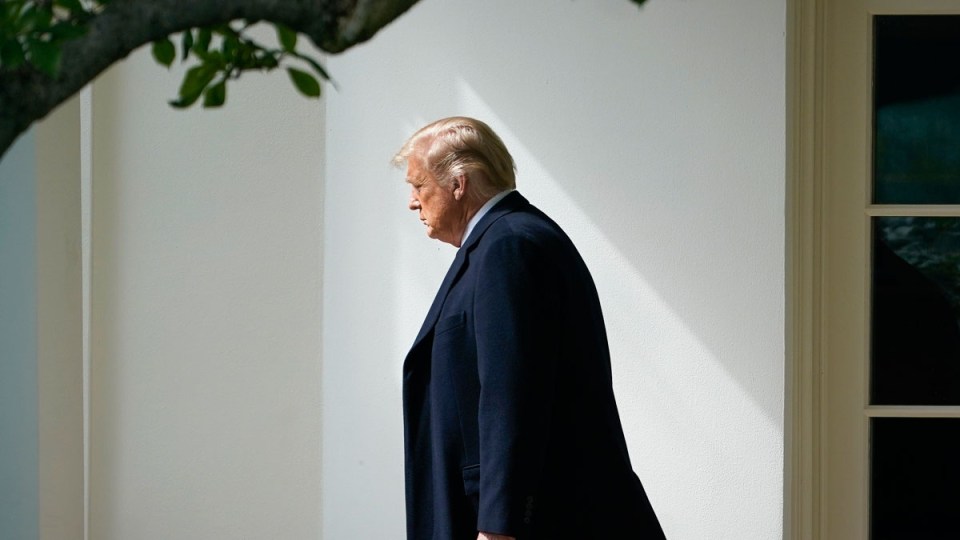 President Donald Trump’s announcement that he had contracted the coronavirus upended the presidential race in an instant, inviting significant questions about his cavalier attitude toward the pandemic and the future of his campaign just 32 days before the election.

Trump had already been trailing Joe Biden in the polls, in part because of his mishandling of a virus that has unsettled the day-to-day lives of voters for over six months.

He compounded his difficulties by disregarding and at times belittling the basic precautions, such as wearing a mask, that his health advisers were urging Americans to take to protect themselves. And he repeatedly prodded states, schools, businesses and even athletic teams to return to normal.

As stock futures fell overnight Friday, strategists in both parties and even senior aides to Trump said the president would face a harsh judgment from voters for throwing the country into greater uncertainty after one of the most trying years in American history.

Some Republicans looking for an upside expressed hope that Trump’s condition would prompt him to refrain from the inflammatory rhetoric that has alienated many voters and make the election less of a referendum on his behavior.

“Peace and calm helps him,” said Alex Castellanos, a longtime Republican strategist. “He is the polarizing element, not the direction he would like to take the country.”

History would indicate that Trump isn’t likely to mute himself, though, as Castellanos noted with a caveat: “Unless he tweets more.”

Even if Trump does fully recover after his isolation period, millions of Americans are already voting right now, via mail-in ballot or in-person early voting.

After a year that began with Trump’s impeachment and has included a pandemic, an economic collapse, racial justice protests and urban unrest as well as the death last month of Justice Ruth Bader Ginsburg, this October surprise could also prompt voters to seek a respite from the tumult.

For all the drama 2020 has delivered, the presidential race has been largely impervious to events, including impeachment, the virus, unrest over racism and severe economic distress. Biden has enjoyed a steady lead in the polls since effectively claiming the nomination in April.

But an incumbent president testing positive for a potentially deadly disease is of a greater order of magnitude.

A great deal remains unknown, though, most of all whether Trump’s symptoms remain mild or grow more severe. And the effect of even seemingly cataclysmic events on the race are hard to predict. After all, when the Access Hollywood video emerged just weeks before the election in 2016, it was widely thought that Trump’s boast of grabbing women’s genitals would effectively end his chances of winning.

As for Biden, he said Friday morning in a tweet that he would “continue to pray for the health and safety of the president and his family.” His top advisers said the former vice-president would maintain the same tone throughout the day and refrain from criticizing Trump.

How Biden will handle the news of the president’s infection with the virus is unclear, and will likely hinge on Trump’s condition. He has made the president’s handling of the health crisis the major focus of his criticism of Trump’s stewardship.

Democratic lawmakers on Friday urged Biden to remain on the campaign trail and tailor his remarks to reflect the seriousness of the moment. “It’s proof that we need to be vigilant and we need mature leadership,” said Rep. Tim Ryan of Ohio. “He doesn’t even need to bring up Trump by name, just say it’s very serious, even the president can get it.”

While Biden aides are being careful to not appear publicly insensitive, they are suspicious that Trump had already contracted the virus by the time he delivered his caustic performance through Tuesday’s debate in Cleveland, a campaign official said Friday. And they are angry that members of Trump’s family refused to wear masks in the debate hall, and appeared to rebuff the efforts of an employee of the Cleveland Clinic to get them to wear one, the official said.

In the White House, advisers to the president acknowledged that the positive test would remind voters of how dismissive Trump had been about the virus, not only with his own neglect of safety but also in his overly rosy assessments about a pandemic that has killed more than 207,000 people in the United States. Trump’s recklessness, one adviser admitted, amounted to a political “disaster.”

It’s almost certain that the remaining two debates between Trump and Biden will be affected. The next one is scheduled for less than two weeks from now, on Oct. 15, and medical guidance would most likely keep the president isolated until then.

The nature of the campaign will be disrupted as well. And after having gone forward with the large rallies he craves, despite rules against large gatherings in many states, Trump will not be able to leave Washington during a final, crucial stretch of the campaign.

Moreover, one of his central arguments against Biden, that the 77-year-old former vice president is enfeebled and unfit to lead the country, has now been undermined by questions about the president’s own health.

In the early hours of Friday, some of Trump’s aides were discussing ways for him to be seen by the public later in the day, so that he could convey to them that he was still leading the country. One option was an address to the nation, a person briefed on the discussions said.

Yet in private conversations, members of his staff were also candid that the president has some underlying conditions that could make him more susceptible to a severe bout of the virus.

Biden has been careful to respect local regulations, wear a mask and hold small events with social distancing. But he has been pressured by some Democrats to campaign more aggressively, and on Thursday his staff reversed course and decided to begin in-person canvassing.

Trump’s stance on masks has put him out of step with the majority of the country and even some in his party. Forty percent of Republicans said in a New York Times/Siena College poll last month that they supported a nationwide mask mandate when social distancing is not possible. Other GOP leaders, including Sen. Mitch McConnell of Kentucky, the majority leader, have repeatedly highlighted the importance of masks and have been careful to wear them inside the Capitol.

The Times survey, along with ones taken in battleground states, also indicated that a majority of voters disapproved of Trump’s approach to the pandemic and trusted Biden to do a better job handling the situation.

This drumbeat of data has not changed Trump’s approach to the disease, though.

On Tuesday, at his first debate with Biden, Trump ridiculed his opponent, a fellow septuagenarian, for his precautions.

“I don’t wear masks like him,” the president said. “Every time you see him, he’s got a mask. He could be speaking 200 feet away from it. And he shows up with the biggest mask I’ve ever seen.”

Even on Thursday, after his close aide Hope Hicks was showing symptoms of the virus, Trump delivered remarks from the White House for the annual Alfred E. Smith Memorial Foundation Dinner in which he insisted falsely that “the end of the pandemic is in sight.”