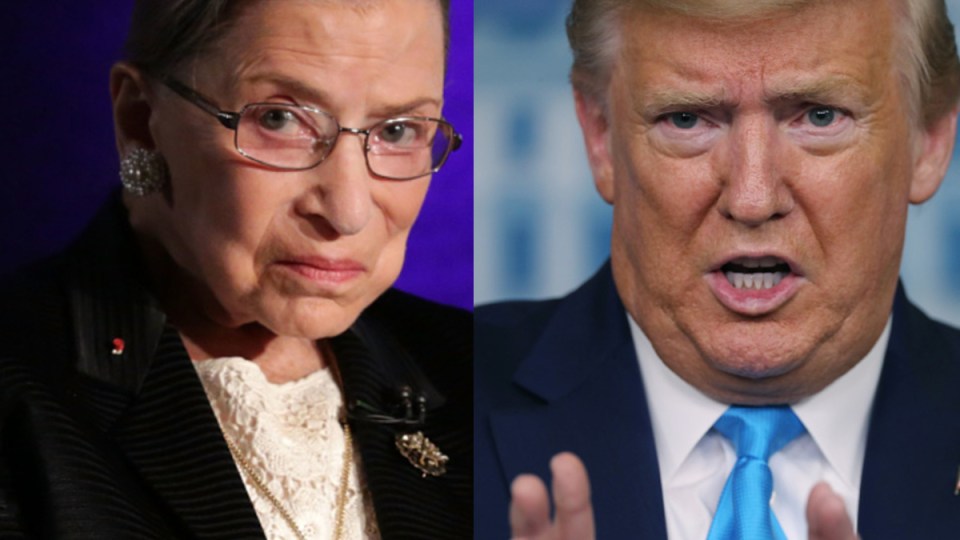 Following the death of Ruth Bader Ginsburg, Donald Trump indicated he will appoint a replacement "without delay". Photo: Getty

Imagine the championship game of your favourite sport is approaching. Your team is playing its arch rival, feared and loathed through the ages. Suddenly, one of the referees who has officiated all this season’s games dies.

Now your rival, under ancient rules that favour the home team, gets to pick a new ref, someone who’s been their fan for years. And this ref will work not just this game, but all the championship games for years to come.

How would you feel?

Now you know, if you didn’t already, why the death of US Supreme Court Justice Ruth Bader Ginsburg is such a big deal.

And while it’s too early to tell which fan club will harness the most energy from this impending battle, one thing has changed: The US presidential election is not just about Donald Trump any more.

“This energises both liberals and conservatives, it ratchets up the intensity, and it puts a focus on what’s at stake in this election,” Neil Newhouse, a long-time Republican pollster, told the Washington Post.

The current make-up is 5-4, conservatives versus liberals, with Ginsburg a feminist icon and the most liberal.

If Trump and the Republican-controlled Senate approve a new justice, that 6-3 majority could define American life for decades, limiting abortion, civil rights legislation, criminal justice reform, healthcare and a host of other issues.

That’s why news of Ginsburg’s death hit with such force.

What had been an abstract issue suddenly became very real. And politically fraught.

Trump, an undisciplined, shambolic campaigner, has in fact managed to focus some attention on the importance of his Supreme Court appointments (two so far).

This is particularly vital to evangelical Christians, Trump’s most rabid supporters. They are singularly focused on outlawing abortion, and another conservative justice on the Supreme Court is a step closer to overturning the 1973 decision that legalised abortion in all 50 states.

“It will give something to fight for over the next 45 days or so that could potentially remind people, ‘OK, this is why I voted for Trump, and this is why even if he makes me crazy sometimes, I’ve got to stick with him,’ ” a former White House official told the Washington Post on Friday night.

But while Republicans may be relieved, Democrats seemed both grief-stricken and electrified.

In the two hours after news of Ginsburg’s death was announced, more than $12 million poured into the party’s online campaign coffers, a staggering sum.

RIP Justice Ginsburg. Agree with her or not, she was a true trailblazer and fighter until the end. https://t.co/WtQv2ob5NA

They remain enraged by the confirmation battle over Brett Kavanaugh, not to mention Senate leader Mitch McConnell’s 2016 refusal to consider President Barack Obama’s nominee in the waning months of his administration.

Many see this news, while tragic, as just the sort of rocket fuel Joe Biden’s cautious campaign needs.

In an act of hypocrisy epic by even DC standards, McConnell said he would shepherd through Ginsburg’s replacement during Trump’s current term, but declined to say if he meant before or after the election.

It’s a shrewd demurral: Several GOP senators are facing tough re-elections, and might refuse to support Trump’s nominee for fear of electoral blowback (“please don’t make me take a stand!”).

Additionally, approving a Supreme Court Justice before election day could reduce evangelicals’ motivation to turn out for Trump himself (we got what we wanted, now we’re outta here).

And a push now could just offend too many Americans’ sense of fair play (assuming there’s much of that left these days).

Something to remember: Polls show 77 per cent of Americans want to maintain legal abortions. Anti-abortion voters – many of them single-issue – were already with Trump, so it’s hard to see those numbers growing substantially.

Democrats are fired up and Ginsburg was a beloved Yoda-like hero, but their anxiety over Biden won’t be allayed now that the GOP have something other than Trump to talk about.

What is certain? “The polarisation in the country was already a 12 on a 1-to-10 scale,” pollster Newhouse told the Post.

“It was already off the charts. This is going to push it up to 15.”