As Ghislaine Maxwell bides her time under round-the-clock surveillance in jail, more rich and powerful figures have been connected to Jeffrey Epstein.

Around the world, noted names are scrambling to distance themselves from the infamous duo. And it’s no different in Australia.

The clipping, from the Sydney Morning Herald, cements speculation the pair holidayed Down Under in the mid-90s.

In Hollywood, trouble reportedly continues in the marital bed of George and Amal Clooney, as rumours of his alleged sexual history with Ms Maxwell resurface for the Oceans actor.

Former US president Bill Clinton can’t seem to claw his way out of Epstein’s quicksand, this time buried by newly released photographs of the late pedophile’s 22-year-old masseuse rubbing his shoulders.

All involved have desperately tried to distance themselves from the duo – except Mr Clinton, who can do nothing to deny the existence of the photographs. There is not any inference that Mr Clinton was sexually involved with Chauntae Davies, the woman in the photograph. 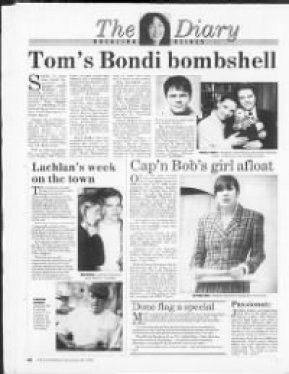 Mr Fox, estimated to be worth some $3 billion-plus, strenuously denied they were his guests when questioned by VICE this week.

Mr Fox’s representative told the news outlet the transport magnate was not even aboard the 100-foot yacht – he was in Hawaii celebrating Christmas with his family, according to diary records.

Mr Fox’s representative said: “Despite the contents of the story (of 24/12/95), Lindsay has never met Jeffrey Epstein and Ghislaine Maxwell.”

The article stated James Packer (of Crown empire) and Deni Hines were co-honour guests on the cruise, making it one of the most “coveted Christmas invitations in Sydney”.

The alleged history between Ms Maxwell and George Clooney comes via Epstein accuser Virginia Giuffre’s tell-all memoir, Billionaire’s Playboy Club. Hints of the interaction have bubbled before, and have resurfaced as documents pertaining to previous legal pursuits between Ms Maxwell and Ms Giuffre are unsealed.

Ms Giuffre wrote that Ms Maxwell would brag at length about her hot-and-heavy moments with high-profile names.

George Clooney was her greatest (alleged) achievement – they apparently had a passion-filled encounter in a bathroom at an event.

Ms Giuffre doesn’t specify when or where, but The Sun has hinted it happened in 2001 when Ms Maxwell was visiting her home city of London.

Sources – specifically those spoken to by US-based Globe magazine – say that hasn’t stopped Amal being disappointed that George is even tenuously linked to Ms Maxwell, who is awaiting trial on numerous sex trafficking charges.

“George is furious at the claims and swears they aren’t true,” the Globe source said.

“Amal finds it grotesque that he’s even remotely associated with these types of people.”

The allegations of sex trafficking against Ms Maxwell and her late partner Epstein sit directly at odds with the values Amal holds dear as a human rights lawyer.

All eyes, all the time

Ms Maxwell is reportedly being watched 24 hours a day, her lawyers claim – and several of those hours are by psychologists.

She has been in a Brooklyn jail for six weeks, and there’s a long road ahead with her trial not expected to be heard until July 2021.

Locked in isolation, her lawyers claim she is being unfairly treated, including being watched without her knowledge.

“We are aware of no other pretrial detainee receiving such treatment,” they said, lobbying the court to have her moved to the general jail population.

Ms Maxwell has reportedly told friends she is scared for her life in prison, riffing off the conspiracy theories that Epstein’s death in prison last year was in fact murder, covered up as suicide.