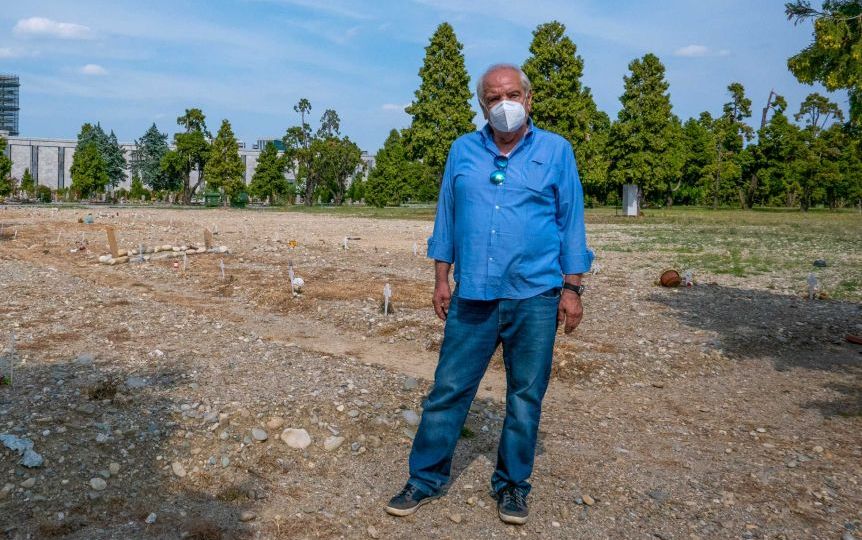 Vando spent weeks searching for his brother, only to find him at this Milan graveyard for COVID-19 victims. Photo: ABC News/Davide Preti

So small are the plastic white crosses, from a distance they’re barely visible.

But a closer look reveals they are part of a field of recently dug graves, not far from the centre of one of Italy’s largest and most sophisticated cities.

Each cross has a name and a plot number on it.

In a section of the Maggiore cemetery in Milan, 128 victims of COVID-19 were buried at the height of the first wave of the pandemic, as Italy’s economic and cultural hub struggled to cope with the accelerating death toll.

The bodies not claimed by families within five days were buried in a section of the cemetery known as Campo 87 – or Field 87.

Normally, relatives have 30 days to retrieve the body of a loved one who died in hospital.

But amid the chaos of northern Italy’s COVID-19 catastrophe, which killed nearly 17,000 people, that window was dramatically shortened to five days because of fear of reinfection.

And some victims were buried at Campo 87 by mistake.

Among them is the body of Gianni Fossati.

The frantic search for Gianni led to a lonely graveyard

Gianni Fossati was 79 when he died from the coronavirus in an intensive care unit at the Fatebenefratelli hospital in March.

The prominent Milan businessman was buried in the desolate field at the end of March, while his family was frantically searching for him.

His brother, Vando, was never officially told Gianni had died.

No one from the hospital or council ever got in touch.

Instead, he found out second-hand from the association of a club Gianni was a member of.

Vando then began a frantic search to locate his brother’s remains and carry out his final wishes – to be cremated and his ashes buried where their mother had been.

The search took two weeks before he found out what had happened – and eventually he located Gianni’s grave at cross number 23 at Campo 87.

“It’s despicable, shameful,” Vando told the ABC as he stood at his brother’s grave just outside the centre of Milan.

“It’s not about my brother. My brother is dead. He doesn’t see it, doesn’t feel it.

Gianni’s wife Magda was in the same hospital also suffering from COVID-19 at the time of his death, but she never got to say goodbye.

Nobody told me about my husband’s death. They lost my phone and I couldn’t communicate with anybody,’’ Magda said.

“They can’t say that the family didn’t care about him.”

Madga and her brother-in-law Vando are now demanding they be permitted to retrieve Gianni’s remains to enable a proper burial and fitting funeral.

But they’re unlikely to succeed for now.

Vando faces a two-year wait to reclaim his brother

Italian law prevents the exhumation of the remains of those who have died of infectious disease for two years, which could prevent Vando and Madga from granting Gianni his final wish.

“This is the area where those who were not claimed by their families were buried,” he said.

“That’s a tragedy inside another tragedy.”

But not all his constituents were convinced by the heartfelt tribute video.

“Mayor Sala forgot about coronavirus victims that have little dignity. COMPLIANT!” one wrote in response.

A region scarred by COVID-19 forever

Lombardy suffered greatly through the pandemic, sustaining almost half of Italy’s 35,000 deaths.

In the early stages of the pandemic, it was the world’s epicentre of COVID-19 cases, alerting the western world to the devastation and pain the coronavirus could do.

In late March images of packed hospitals struggling to cope with victims and military trucks carrying bodies of the dead provided a grim forewarning of what was to come.

For now, Italy has flattened the epidemiological curve, and spectators could be allowed back into football stadiums by September if the trend continues.

It’s a notion many thought would be impossible just a few months ago.

Milan’s city council has suggested it will turn the burial site into a coronavirus memorial and replace the small crosses with tombstones.

Grass will be planted in the field to make it a meadow, a statue will be erected and a commemoration board placed there to remember the victims.

But that has not appeased the Fossati family, or others like them who have had loved ones mistakenly buried there.

There are reportedly at least three other families in a similar position, and some have hired lawyers to explore what legal avenues are available to have their relatives moved from Campo 87.

“This is not Milan,” Vando said.

“This is another place, another city, another country.”

With additional reporting by Eugenio Grasso and Davide Preti

After coronavirus and confusion, Italian families try to recover loved ones from a lonely grave