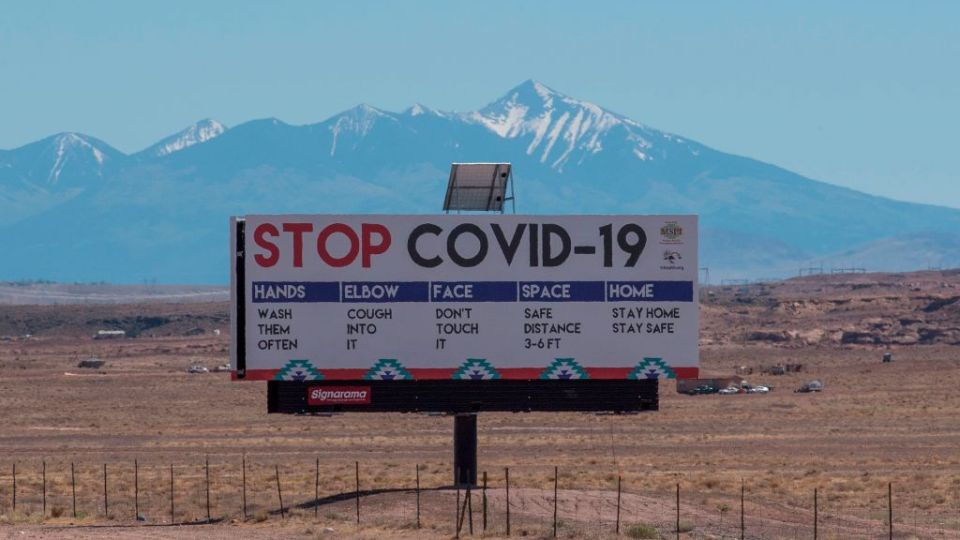 A sign warns against the COVID-19 virus near the Navajo Indian nation town of Tuba City, Arizona. Photo: Getty

New coronavirus infections have hit record highs in six US states, marking a rising tide of cases for a second consecutive week as most states moved forward with reopening their economies.

Nevada also reported its highest single-day tally of new cases on Tuesday, up from a previous high on May 23.

The numbers of those being treated in hospital are also rising or are at record highs.

At Arizona’s Tucson Medical Centre on Monday, just a single intensive care unit (ICU) bed designated for COVID-19 patients was available, with the other 19 beds filled, a hospital representative said.

Health officials in many states attribute the spike to businesses reopening and Memorial Day weekend gatherings in late May.

Many states are also bracing for a possible increase in cases stemming from tens of thousands of people protesting to end racial injustice and police brutality for the past three weeks.

In Oregon, health officials are trying to contain an outbreak of more than 200 new cases in Union County linked to the Lighthouse United Pentecostal Church.

The Oregonian newspaper reported that a video on the church’s Facebook page on May 24 showed hundreds of people standing close together singing.

Large gatherings were not permitted under the state’s reopening plan at that time.

In Texas, Governor Greg Abbott said the record number of new cases is due to more testing.

Hospitalisations – a metric not linked to increased testing – also hit a record high.

For the week ended June 14, testing increased over 30 per cent but the positive rate held steady at 7 per cent, a Reuters analysis showed.

The top Texas health official, John Hellerstedt, said the increase was manageable but the situation could change.

“The possibility that things could flare up again and produce a resurgence of COVID-19,” which would stress the state’s healthcare system “is still very real,” Dr Hellerstedt said.

Across the US, 17 states saw new cases rise last week, according to a Reuters analysis.

In Oklahoma, where President Donald Trump plans to hold an indoor campaign rally on Saturday, new cases rose 68 per cent.

On Tuesday, Oklahoma health officials urged anyone attending the rally to be tested for the coronavirus before arriving and then to self-isolate following the event and be tested again.

The health commissioner urged those over 65 or at higher risk of coronavirus-related complications to stay home.

More than 2.1 million people have been infected with the coronavirus in the US and more than 116,000 have died from COVID-19, by far the most in the world.

Coronavirus surges in six American states – and it’s getting worse