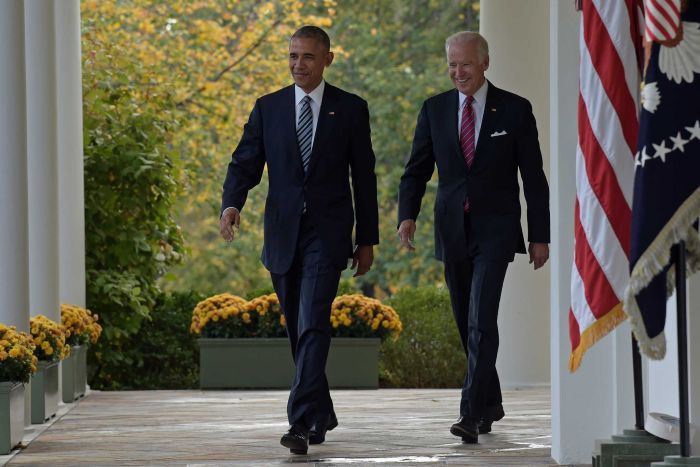 Former United States president Barack Obama has publicly endorsed Joe Biden ahead of the US election in November.

Mr Obama posted a video to his Twitter account to make the announcement, during which he spoke of Mr Biden’s role as his vice-president and praised him for having the “qualities we need in a president right now.”

“Choosing Joe to be my vice-president was one of the best decisions I ever made, and he became a close friend,” Mr Obama said.

I’m proud to endorse my friend @JoeBiden for President of the United States. Let's go: https://t.co/maHVGRozkX

“Joe has the character and the experience to guide us through one of our darkest times and heal us through a long recovery,” Mr Obama said, referencing the current coronavirus pandemic.

“Joe was there as we rebuilt from the Great Recession and rescued the American auto industry. He was the one asking what every policy would do for the middle class and everyone striving to get into the middle class.”

Mr Biden responded to the tweet, saying the endorsement “meant the world to him.”

Barack — This endorsement means the world to Jill and me. We’re going to build on the progress we made together, and there’s no one I’d rather have standing by my side. https://t.co/0mAjPZeYmd

Senator Sanders said his decision to end his campaign was not an easy one.

“Please know that I do not make this decision lightly,” he said in a livestreamed speech to supporters.

“If I believe we had a feasible path to the nomination I would continue, but I know that it’s just not there.”

Although Senator Sanders said he fully supported Mr Biden as the nominee, he added he would remain on the ballots in remaining primaries and collect electoral delegates to influence the party platform at the nominating convention.

Mr Obama may have stayed out of the primary race but Mr Biden frequently pointed to their time together in the White House during the campaign and often spoke of the Obama-Biden administration when talking about various accomplishments and referred to himself as an “Obama-Biden Democrat.”

Despite that he also tried to insist he was running as his own man, telling anyone who asked that he urged Mr Obama not to endorse him out of the gate, or even in the thick of the primary.

But Mr Biden was a staunch defender of that legislation and called it “bizarre” for Democrats, even faintly, to attack Mr Obama’s record.

US President Donald Trump is yet to respond to Mr Obama’s endorsement.